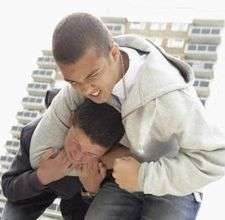 Last night, after getting the coolest hair cut ever, Sandor got a phone call.

I could only hear his side on the conversation.

“Oh man, yeah, I’ll handle that in the morning.”

“Thanks, Buddy”  he said as though he were in a business meeting. Then he hung up.

As casually as I could, I asked what was going on.

Sandor said, “This new kid at school he called my friend Katie a name.” Then he leaned over and said, “He called her a slut.”

“That’s horrible! ” I responded. These kids are only in seventh grade.

I thought about the girls in his class. Seventh grade is tough and wonderful.  All the girls are going through a really beautiful and hopelessly awkward phase. Soon they will all look like through breeds but for now….

Alex jumped in “If you get in a fight, you’ll get suspended. Do not let that happen.”

“Yes sir. I know. I’d never throw the first punch. But I can’t let him go around saying that kind of stuff.”

I looked at him. “So what are you gonna do?”

And then with a calm, almost dismissive air he assured me, “I’ll handle it Mom.”

At that point I wanted to demand details but I have to let him be a man, a good man and a gentleman.

If I stop him from defending this girl because I’m worried about the outcome and his future, what message am I sending? If I squash his attempt to be honorable and a gentleman what kind of man will I be left with. One that looks away when somebody is being bullied or robbed. Who avoids conflict because they don’t want to get in trouble.

But the truth is, when I listen to his 7th grade stories it’s the hot headed boys who throw off their back packs and start swinging, who are in most of the fights and get in trouble. Something offends them and they all start throwing the haymakers.

Sandor knows how to punch but he’s also very reflective. He thinks things over, sometimes too much.  I guess I need to relax. If he says he’s gonna handle it…..it will be handled.