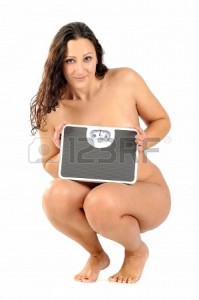 I  peed, dropped my towel and stepped on the scale, knowing bad things were going to jump up and slap me in the face. For three months I’ve been eating my way across America and I’ve had very little time to work out.  Clothes have gotten tighter and tighter….even my underwear.

It was Monday, I’d get the problem taken care of, get my eating under control.  Then I pulled out a loose of “flowy”  tank top and a skirt with an enormous amount of elastic.

I decided I’d adopt my daughter, Lexie’s, health program.  When she wants to get in shape she can eat anything she wants as long as it doesn’t come from the freezer or cabinet.  That basically leaves her meat, fruit and veggies. It worked beautiful.

The truth is ten or fifteen years ago nine pounds would have sent me into  hysterical starvation mode. I’m bothered now but my world isn’t on fire. Nine pounds isn’t the apocalypse.  At my age men don’t really care  much about five or ten pounds.  If they think a woman is attractive or hot it’s because she’s smart, confident and fun that’s what makes middle age sexy.  Nine pounds when you’re sixteen or twenty one can be big trouble for two reason. Lots of young men are still pretty shallow at that age so a cheerleader body is important. And girls generally don’t have the confidence not to care. They think it’s a big deal and that makes it a big deal.

Grown men are generally smarter than that and less judgmental.

When I told my husband I’d gained nine pounds he was watching NCIS.  I told him my big plan about working out and eating healthy foods but he wasn’t really listening. Then he surprised me, during a commercial he looked over and said, “Hey, does that mean your boobs are bigger?”

Last week I downloaded the epic bestseller, soft porn/fiction Fifty Shades of Gray to my Kindle. Then I stepped aboard my favorite elliptical at Anytime Fitness for a quick twenty minute work out.

FIFTY MINUTES latter I looked up from my titillating  dirty book.(How often do I get to use titillating?) Fifty minutes on the elliptical with the resistance set at 8. I burned 560 calories and nobody was even naked yet.  But they were headed that way.

I was drenched with sweat, my calves ached and somebody was obviously waiting for me to get off the elliptical. How long had they been waiting? I was embarrassingly oblivious to their impatient stares. The protagonist, Anastasia (of course her name is Anastasia) was getting kissed and groped in an elevator.

By the time I’m finished with this book I’ll look like a lanky super model! I can’t wait to get back to the gym.

Fifty Shades of Gray isn’t a great book, it’s not even that well written. There are some awkward cliches to stumble over, but it’s so easy to get lost in. It’s so easy to pull the sheet over your head and absolutely lose track of time, even on an elliptical.

And if  you’ve got  it on a Kindle, nobody has to know what your reading!  For all they know you are studying the latest issue of Psychology Today or rereading War and Peace. I can hide my dirty little secret from friends and family.