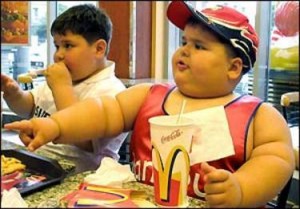 Sandor was talking about his third grade PE. He always comes in third place when they run and that’s ok. But he told me Scotty  always lost,”even to the girls’ and then gets mad. Scotty is probably 75 pounds overweight so this news was not surprising. Then Sandor said, “Scotty hates PE so he doesn’t even try, really”.

Well, I thought, I’d hate going to a class that made me do something I knew I was going to lose every single time. And then my friends were going to laugh at me because I lost. Damn, I’d do anything to avoid that class. I’d pretend I had a stomach ache, I’d wear the wrong shoes, I’d even get in trouble so I could go to the principals office.

But here’s the deal. If Scotty were failing math or English, the school would make sure he had help, plenty of tutors and such, to keep him from falling behind and getting an F.

Why don’t they do that for the kid who should be failing PE? (Of course Scotty will pass PE even though he shouldn’t)  His obesity will hold him back, keep him down, and there’s no doubt he’ll have monumental health problems in the very near future. I think being morbidly obese is just as bad as being illiterate. So why don’t they get Scotty a special fitness coach who helps in work out in a fun way, no winners or losers, just fun. He’s a smart kid, teach him about good food, maybe he’ll take the message home to his huge mom. But our schools won’t address the issue. So Scotty has to keep running in races he’ll never win and every time he’ll hate athletics just a little bit more.

When I suggested mandatory school exercise (fun exercise) to my Republican friend he said,”are the school supposed to be the parents now?”
“Maybe, if that’s what it takes.”
He laughed, “Yo

u know who has a great school exercise program? Communist China.”

Damn, he was right. How many times have I seen those pictures of rows and rows of Asian kids doing jumping jacks?

Still,I’m standing by my original idea. If a fat kid is failing PE, we need to find a way to help him. Not doing anything is going to kill him.