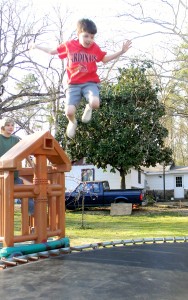 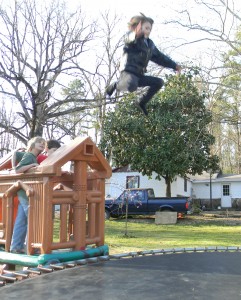 If you have teenagers  and a trampoline, bad things are happening in your yard. And I’m not talking about broken bones and twisted ankles.

There should be a new warning label on trampolines…”WARNING! TEENAGERS WILL MAKE OUT AND MORE ON  A TRAMPOLINE AT NIGHT!” I haven’t figured out what the graphic should look like for this warning.

A few months ago, when Lexie, who is now 14, started getting “real boyfriends” I knew it was time to consult with Jack and Mary, her older brother and sister. Jack is 23 and started getting serious about women when he was in 6th grade. (That was the same year he was able to grow a full Magnum PI mustache too.) I asked Jack what locations and situations I needed to be concerned about.

I could hear him smiling through the phone as the memories came back. “Well, keep an eye on them when they walking down by the creek, and the trampoline was a really good place to be alone.”

“Gross!” I said, “The trampoline?” He just laughed and I knew it was serious.

When I asked Mary about the evil things that happen on the trampoline she said something like “Well yeah, you’re better off letting them go in her room, with the door open and the lights on. The trampoline at night makes thing way  too easy. I mean, it’s ok if you make Sandor (the 8 year old little brother) go out and jump with them.”

Yikes! What’s been going on in my yard for the past 12 years?

And then it got worse. One of my friends and co-workers is 26. I mentioned this sexy trampoline situation and she laughed, “Yeah, my first time to have sex was on a trampoline when I was a teenager. We’d jump and laugh for a few minutes, then his parents would start watching a movie….”

So last night, I had to drop Lexie off at the boyfriends house. Sure enough, there was a trampoline in the yard. ARRR. Before I put that car in reverse I rolled down my window and yelled at the two of them, who were still hugging hello. “No jumping on the trampoline…ever.”

*Thanks for reading Hampoland.  If you’re looking for me tonight I’ll be out in the yard…dismantling. Take care, DH