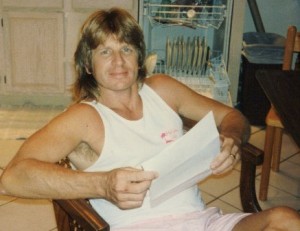 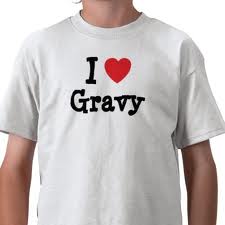 Two nights ago I had a fight with my husband, who’s a chef, about gravy. Yeah, how stupid is that? I was mad because his home made, delicious truck stop gravy was full of calories and therefore obviously unhealthy.

Last night I fixed a frozen bag of spicy chicken oriental stuff for dinner. It was kind of low in calories  but was it healthier than his gravy? I don’t know. I looked at  bag and read the list chemicals, preservatives and flavors  added to my “healthy” Asian meal. There were more than fifty ingredients in one bag. I only recognized six. That’s gross.

“Alex,” I hollard across the house, “how many ingidents did you use to make your gravy?”

I could tell he thought I was trying to trap him so we could argue about gravy again. Finally he said, “Five counting the salt and pepper”.

So why does “soul food”, “comfort food”,  “Southern high truck stop fare” have such a bad reputation. I’m about to fix a big fat Southern Thanksgiving meal, in fact the turkey is already in the oven.  And I don’t think any dish has more than six ingredients. My beautiful mashed potatoes are simply made of potatoes, butter, milk and salt, no msg, to coloring no perservatives.  Are they high in calories? Probably, but at least I know exactly what’s in there and what it does to my body. The stuffing is kind of complicated but again, it’s all natural,  bread crumbs, chopped onion and celery, chicken stock and fresh herbs. Even my green beans and black eyed peas are Southern style awesome  and  idiot proof.  Fresh beans, bacon (I am from Arkansas and everything is better with bacon) onion and salt.

Just because a dish is “low calorie” doesn’t mean it’s healthy. I think we loose sight of that sometimes. I’d rather have a few extra calories, natural flavors and textures than processed goop flowing through my veins.   I believe my body knows how to process butter, but I not sure it knows how to handle massive amounts of MSG and perservatives.

I could go on but you get the idea. So, next time a friend from California or Connuticut gives me that  “you’re going to eat gravy made from meat drippings?” look.  I’m going to throw my shouldrs back and say “hell yes…and it’s all natural!”

I hope you have a happy and joyous Thanksgiving, love your babies, hug your momma and don’t nag your husband about the gravy.