My son, Sandor, who is eight, was really excited about his last Red Belt testing (his last before his black belt testing). He’s been training in TaeKwondo since he was three and takes his martial arts pretty seriously, at least as seriously as a boy who still thinks the name “Dick” is super funny. can take anything seriously.

His form and sparring were really outstanding. He dominated bigger kids, then shook hands and hugged them. And when he had to grapple the other boy he tapped him out in less than thirty

seconds. Sandor was having a great testing.

Then it was time for his board breaks. At our school, Fountain Lake Martial Arts, even the little kids have to use full size one inch pine boards. They are not planed down or scored.

My sixty pound son was expected to break the same boards as the teenagers and adults. He didn’t think it was a problem. While practicing earlier in the week, he broke easily with his right and left step-behind side kick.

You can guess where this is going. In front of 75 people, my baby boy stepped up and kicked those boards at least a dozen times and nothing broke, nothing even cracked. He started to tear up because “breaking is easy, not breaking really hurts”. I could see all the reasons he wasn’t going through the boards (no knife edge, he didn’t pivot and he was stopping at the board instead of kicking through it) but that night, I was just a mom so I had to remain silent. What I wanted to do was stand up and break the damn boards myself, then hug him and take him home. Instead, I sat without breathing and prayed.

His instructor called him to the judge’s table. Sandor’s chest was heaving as he tried to hold back the tears. “Don’t cry Buddy, just slow down and break the boards but don’t cry.” 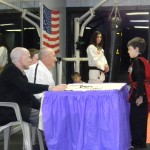 Sandor nodded and sniveled. He looked so tiny and broken.

The boards still didn’t break. He kicked them hard at least four or five more times but still nothing happened and then, testing was over. He limped out of the room.

I was devastated for my son. Three ladies in the lobby, who had been watching, hugged me and said the scene actually made them cry. Two other moms admitted they were praying for the boards to break (we live in the Bible Belt).

Watching Sandor not break the boards was absolutely heartbreaking. But he didn’t really fall apart and cry until we got to the car. He was wounded, in pain, embarrassed and heartbroken.

But today, four days after testing, Sandor put on his uniform and headed off to class, ready for some action. As he lined up, undaunted by his testing, I understood he truly has the heart and soul of a Martial Artist. He never whined about the boards or blamed his holders, he never said he wanted to quit or skip class, he just moved forward. Indomitable Spirit.  That’s one of his tenents, and I guess his heart understands the meaning of that phrase. Lord, there’s so much I could learn from my  son.

*Hi there, if you like this please pass it on. Thanks and I hope all the boards break for you.