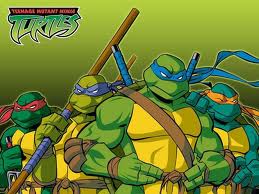 When I thought about writing a blog centered on the Teenage Mutant Ninja Turtles I shook my head then thought “hell yeah!” TMNT are awesome.

There’s something about those weirdo reptiles. They have become iconic in a way the Power Rangers couldn’t . And I think it’s because they are flawed, annoying and have bad habits. Raphael is the natural leader but he farts and burps and forgets to speak with respect when addressing Splinter. If you were never a TMNT fan, Splinter is their teacher, their sage.  And he’s a rat.

Yesterday, I saw all kinds of new Turtle stuff at Wal-Mart. Little boy boxers, hats, shoes. The dudes are back and yes I do want to see them again. All the turtles were kind of in love with April, a journalist, who I think will be played by Megan Fox. But they are mutant turtles. How can love work between a woman and a turtle?  I’m not going to think about that. Check out http://teenagemutantninjaturtles.com/.

All the turtles and the rat once were normal animals but they somehow got into toxic ooooze and became semi-human super heroes.

When my son Jack, who is now 25, was little, there were lots of moms who wouldn’t let their kids watch TMNT. They were freaked out by the freaks. They thought there was something demonic about them, that drugs were involved in there inception.

Still, I caved and let him collect dozens of action figures with flip-able heads, throwing stars and bow staffs. They were great toys.

Parents didn’t  trust the Ninja Turtles but I think they are freakishly brilliant. They are flawed, just like the rest of us, so we like them, or at least trust them because they are humans with shells and four feet. They are turtles, with super hero powers, who are more  human than lots of actual super hero humans  They struggle against their anger, their instincts, their arrogance,  and their fears. People aren’t perfect, most of us are a mess. Jesus was the only perfect one. The rest of us just flail around trying to figure out how to stop screwing up. The TMNT are just like us.  Just like all of us.

Their new movie comes out soon. Here’s the link to the web site http://teenagemutantninjaturtles.com/ check it out. They are fun, they are real…heros on the half shell.  I still kind of love them.