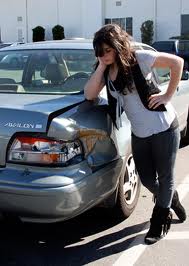 Yup, the code has been broken.  One of Lexie’s friends recently explained to me exactly how teenaged sexting with pictures starts.

As parents when we hear that a teenaged girl is in a pickel because she sent a picture of her boobs to a boy we sigh and groan and say ‘what the hell was she thinking, how could this happen?” Well, now I know.

It goes something like this and according to my 15 year old informant the script doesn’t vary much.

Girl and boy are flirting via text.

Guy: “I’m  sore from lifting weights. But look at this”. Then he sends a picture of himself with his shirt off looking all ripped.

Guy: “You should send me a picture”.

Girls sends a picture of her pretty face.

Guy: “That’s not fair. Send me a good picture.”

And then…if the girl is stupid(that’s how teenager put it)…she sends him a picture of her boobs. If she’s smart she laughs at hims and says something like “No way.”

And then the teenager and Lexie and I discussed the next thing that happens. Both the boy and girl take their phones to school. The girl shows other girls the picture of the guys muscular chest, everybody comments and it’s not that big of a deal.

And the guy does the same thing. He shows all his friends, team mates and acquaintances, even his little brother and uncle,  the picture of the girl without her shirt. And it’s a very big deal because he promised he wouldn’t show anyone.

As parents I think we have a few options.  We can pull out children out of school and keep them at home for the next ten years.

We can take away their phones or at least give them phones without cameras. Or, we can warn our daughters that this is how the situation almost always unfolds.  The boy will show everybody the pictures on his phone because he’s proud of them and thinks their hot. It’s doesn’t make him a bad guy, it just makes him a normal guy.

After I learned all this from the 15 year old I called one of my older, 20 something kids (I’m not going to name).  I started explaining how all the teenaged sexting starts and was interrupted.  “Mom, I know how it starts.”

Ouch!  And I made a mental note. “Never ever pick up older childs’ phone and casually glance at the photos without permission.”

*Names have not been included to protect the innocent and guilty.