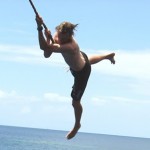 Teen-aged boys have more bad ideas in an hour than the rest of us have all year long. If you have a son, you already know this. If you have a little boy, consider yourself warned.I've raised a lot of boys, worked out with them and worked in a high school so I know teen-aged boys are ridiculous and it's not really their fault. Their brains are wired for adventure, thrills and 'what ifs". When my son was 18 and attending an Honors College he and some friends decided it would be a great idea to build a sling shot the size of a hammock, take it up to the roof of their apartment building and fling water balloons at the local Farmers Market.

These guys were not stupid and they weren’t mean, they were just boys and nothing in their brain flashed on and off and screamed, “Bad idea, you’ll get arrested”.

For several years I worked at a public high school for exceptionally smart kids, these students excelled in math and science, still, they were the ones who thought skateboarding down a flight of stairs was an awesome idea, they were the guys who shook hands and punched each other in the face because they all wanted black eyes. Well, black eyes look bad, don’t they?

Bad ideas are like popcorn in the teen aged boy brain and the truth is grown men continue to have really bad ideas all the time too. (I came home one day and my husband and the kids were having a butter flinging war in the living room. The kids immediately said, “dad started it” and I didn’t doubt them for a second.)

The difference between a 15 year old boy and a 35 year old man is simple. The “what about the consequences” part of the brain has developed in the man brain, so he has the same bad ideas but he decideds it’s best not to act on them. He knows either I’ll get mad or he’ll get arrested.