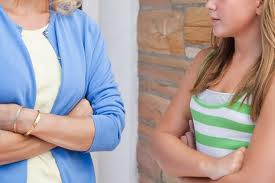 I am an emotional hurricane. My emotions are excessive and it drives me crazy. There are days I catch myself acting exactly like a fourteen year old even though I know it’s moronic.  I don’t actually roll my eyes, but I sigh, walk away and say ‘whatever” in my head, over and over. The difference is I know I’m not supposed to be a sullen, snarky teenager, but I can’t help it. Most of the time kids don’t actually know how stupid they are acting so it’s easier to help them through their idiocy.

Here’s what happens.   I get my feelings hurt, I feel unappreciated or slighted. But I don’t tell people how I feel, so they can’t fix it. Instead, I try to forget about it or I act like I don’t care. BUT I REALY DO! Then I do the really stupid teenage thing, I say “Whatever, it doesn’t matter,” over and over in my head. Just like a silly 13 year old girl with braces and too much eye-liner

But It Does Matter…Of Course It Matters. You hurt my feelings;   so I go into self defense mode.

And the fact  you don’t know you hurt my feelings or made me feel bad makes everything even worse… so I “turtle up” . I say the dreaded words….”what-ever, it doesn’t matter” over and over like an old record album with a scratch.  It gets stuck. The mantra of “whatever it doesn’t matter”  is my shield, my chain mail amour, my un- breechable (that’s apparently not a real word, I just made it up but I think it’s a good one) wall. My shark infested moat. You get the idea. If I keep repeating that annoyingly immature phrase they can’t  hurt me anymore..

Teens do the exact same thing for the very same reasons.  But most of them don’t realize their motives. They get hurt, then mad, then really pissed off. They cross their arms and say, “Whatever” then roll their eyes and sigh.

Grownups who don’t have any of my immature problems kind of make me crazy. They seem too perfect, too controlled, too grown up.  Where’s the passion? Hey, I could use a little company in my playpen.

So, if you see me act like an idiot, be patient. Like a teenager, the madder I get the more I care.  If you really piss me off, you can be sure I love you. I’m an emotional hurricane but storm season generally passes pretty  quickly.