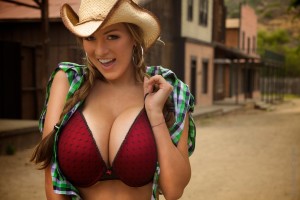 Boobs, they aren’t worth it, especially big ones.  Guys have no idea what a bother boobs are. Sure, they are fun to have around at first, but then the problems begin.

For me, the problems started in Junior High.  My boobs showed up and suddenly my breast stroke and crawl slowed down. I wasn’t comfortable on the swim team anymore.  And I had a tennis coach whom I adored, but I now realize was a wretched human being.  When my boobs arrived he started making jokes about them bouncing around when I ran across the court “There goes Boom Boom” ….so I quite the team. (All this happened before the invention of the sports bra.)  I wish Serena Williams could find this man now and beat him with her tennis racket on my behalf.

Most guys love big boobs, but they have no idea how expensive they can be.  Sure, you can buy an off the rack bra at Wal-Mart for fourteen dollars but the never ending pinching, pulling and poking will make anyone insane.  Men, you can’t imagine what it’s like to have two nine inches pieces of wire and a whole lot of elastic and hooks up under your shirt. If you have money you can get fitted for a bra that fits perfectly and feels great, but those cost between $40 and $100 dollars.

Men, have you ever paid $50 dollars for a pair of underwear? And that’s just for one bra, we have to have several in the drawer. Hopefully you have several pairs of briefs available.

So poor women or middle class women, with big boobs, who can’t afford to get fitted in a specially shop, are really in a miserable place. That’s not fair!

And then there’s breast cancer.  My family has been blessed. We have not had to battle breast cancer. But men can’t possibly imagine this situation. Sure you have prostate cancer, but your prostate hasn’t been something you showed off over the years, hasn’t been something sought after or ogled. Suddenly, a breast, which theoretically has been thing of beauty, something that fed your sweet hungry children, is bad.

Boobs get in the way when we run, sleep and jump on trampolines. Most men love them but they hold us back. I’m so conflicted, angry and I am not a fan.

Fortunately, my husband one hundred percent disagrees with me.