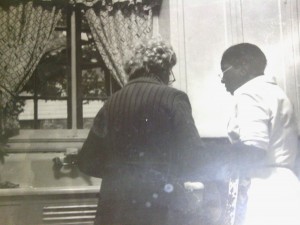 For more than thirty years a woman named Louella Thomas worked for my family. She split her week working at our house and at my grandmother’s big white house on Prospect Avenue.

We called my grandmother Bubba, but her real name was Ruth Stell. She was the widow of a surgeon and spent her days trying to help people and keep her life just as it had been when her husband Dr. Jack Stell was still alive.

Louella was my best friend.  She was  my grandmother’s best friend too, Bubba just didn’t  know it.

When I was seven years old Louella saved up enough money to take a three week tour of the Holy Lands with her church group. Bubba was furious, indigent and shocked.  Her maid traveled overseas before she did!  Louella brought me a camel made of straw from Jerusalem. Bubba said it was ugly and made me keep it at our house.

During the sixties, when there was so much racial tension and turmoil, Louella took great care to keep Bubba out of harms way.  Sometimes Bubba drove her all the way home, to the housing projects on Spring Street. But when things were really bad, Louella only let my grandfather drive her half way home, then she took a cab.   She didn’t want anybody yelling at Bubba and upsetting her.

Louella was probably ten years younger than Bubba and over the years she began moving  a little more slowly. When she was close to sixty, Bubba became very concerned because Louella had to drag the vacuum cleaner up and down the big stair case.  So she bought a second vacuum, one for upstairs, one for down stairs. Over the next ten years Bubba ended up buying four or five more vacuums, one for almost every room because she didn’t want Louella lugging them around.

Every afternoon the soap opera The Doctors came on at one o’clock. It was “their story”. Louella would take her lunch at one o’clock and the two old women would sit in Bubba’s bedroom and watch “their show” together.  Bubba’s room was the only room with a tv and it was the only air conditioned room in the house.

If I walked in and interrupted both women would turn  and  “shhhh” me together, almost violently.  Then Louella would wink at me and I knew I wasn’t really in trouble.  As years passed, Louella got too old to work every day. But The Doctors continued. The two old ladies would stay on the phone for exactly an hour watching their show together and talking about the details and plot twists during the commercials. Everyone in the family knew calling Bubba between one and two was useless.

As they got older more of their friends died until they were just about the only ones left. Then the ladies would sit on the side porch together, Bubba in her dress, Louella in her white uniform and they would send to the kitchen for ice tea and ice cream.

Bubba was in her late eighties, maybe even ninety when my brother, Jack, was killed. He was twenty three years old and in college. My father had died just two or three weeks earlier.  I remember that night so clearly. I was sitting with my mother when she got the news. And after just a few moments of thought, Mom picked up the phone and called Louella Thomas. She asked Louella to please take a taxi to my grandmother’s home.  She knew Bubba wouldn’t be able to bear the news of my brother’s death without her dearest friend at her side.

(If you enjoyed this story or hampoland please help my daughter out with her fundraising efforts. Take a look at this link it’s really funny and any little bit would be wonderful. Thanks! DH)