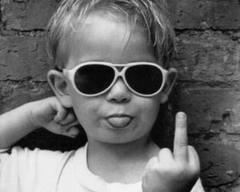 There are two words parents and Martial Arts instructors hate, fear, dread and have to deal with.

“You know what? You know nothing. You’re a kid…you don’t know.”

As a parent there are two major intersections when “I know” slams through the intersections of life and turns you nice kid into a pain in the butt punk.

1. Right around the 12 or 13 year old mark it happens.  When the first arm pit hairs and boobs appear teens start thinking they know EVERYTHING. Boys get boy muscles and think they are bad to the bone, powerful, dangerous and all knowing.  Girls realize they are sexy and have power so they become snarky and use gossip and eye rolling like a dagger.

2. The sophomore year of college (around age 19)is the year of “I know”, heavy sighs, “you don’t understand anything.”  and knowing so much about the “real world”  than their parents. The first year of college they are still giddy, overwhelmed and excited. but the second year they think they have EVERYTHING figured out. They think they are worldly cause they drink  coffee with professors and can stay out as late as they want. Thankfully this wears off and by their Senior year they realize how little they know and they really don’t want you to drop them from your insurance policy.

When “I know” is said in a Martial Arts school things get touchy and sometimes painful.  The instructor has to do something..quickly. the “I Know” attitude  is toxic for the whole school.

When  a brilliant, athletic, skilled teen age boy says “I know” to his instructor instead of “yes sir” he puts a lid on a cup that is only a quarter full .  This young man has two or three extraordinary and seasoned instructors with years and years of Taekwondo knowledge.  They are pitchers filled with ice water and they want to pour their knowledge into that kids cup/brain, so he can continue learning and improving.

But the second he says “I know” he puts a lid on his cup. He thinks he knows it all, he believes his own hype. Nobody can learn anything if they think they already know it all.

It’s heartbreaking for the instructors and parents. But there are options. Martial Arts instructors can sit down and have a serious discussion about the kid’s ignorance and lack of respect or, they can kick the lid off the cup. Instructors never like to “thump” a student but sometimes that’s the only way to get a teen to realize how little they know.  Likewise, parents can have a serious discussion or they can start “thumping” and  change their child’s understanding of the universe. Cut off cell phone service, auto insurance or reposes the car they you probably paid for. Sometimes you just have to let them fail…big time.

Good news, most kids figure out how little they know and return to normal.  The important thing is to hug them after you cut up their debt card or round kick them in the head.  The hug is the important thing because it says, “Hey jerk, I still love you”.

Their bruised ego will recover. Most teen egos are like fire ant hills they always come back bigger and stronger.  But if you don’t fight the good fight and try to keep them in check they will take over your entire yard and make your life pretty hellish.