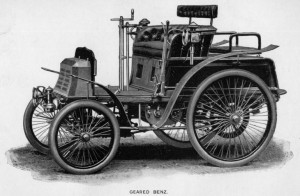 My grandmother,Ruth Ross Stell (aka  Bubba), was born in New Edinburg, Arkansas in 1895.  New Edinburg is right outside of Fordyce in the ‘Big Woods” of Dallas County.(For those of you who live outside of Arkansas I know that tells you absolutely nothing.) If you live in East Texas, you know what the middle of no where is, so this story is for you guys.

She was almost 101 when she died. During her life time Bubba saw the invention of everything from airplanes and electric can openers to televisions and dishwasher . When Bubba was a girl and dating my grandfather he played foot ball for Ouachita Baptist University wearing a leather football helmet.

But one of my favorite ‘Bubba stores” is from 1902 or 1903. Bubba was just seven or eight years old.  One afternoon she and her father took their wagon to Fordyce. There was a great deal of commotion in the center of town.  Everyone lined up along the streets and waited.  Bubba said, “off in the distance I could see a cloud of dust rolling towards us. It was like a little tornado.” And suddenly a car appeared with spoked wheels and no top. The driver was wearing goggles and a duster, the crowed shouted and cheered, in awe of the rolling buggy. The driver smiled and waved at the folks.  And then it was gone.

Bubba didn’t see another car for two or three years, because who drove to Fordyce, Arkansas in 1902?

After watching the automobile pass, Bubba and her father climbed back into their wagon and headed home.

Lots of things have changed, computers, electric shock collars for dog, neon signs and Swiffers are all a big part of our lives.But some things remain the same, somethings have endured the test of time. I just watched Kate and Prince William carry their new baby boy out of the hospital in London. The expressions of parents with a new born baby hasn’t changed. The wonder in a child’s eye when you plug the Christmas tree in for the first time hasn’t changed. The nervous feeling a boy feels when he’s asking a pretty girl out, hasn’t changed. And the desperate, “no holds barred” love I have for my children is just like that of parents for thousands of years. Somethings never change. And these are the important things in life.