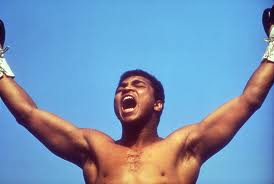 Silliest thing on the planet.  My buddy Amelia gave me a  box of Wheaties because Muhammad Ali was on the front. She knows I have had a ridiculous love affair  with Ali for more than forty years. I read the Wheaties caption for Ali…” the Ambassador of Sportsmanship”! I dropped my cereal spoon in shock.

Ali was a vain, pompous, braggadocio. “I’m not the greatest; I’m the double greatest. Not only do I knock ’em out, I pick the round,” he said famously.

He was famous for insulting his  opponents relentlessly. He said to Sonny Liston, “Hey, come on you big ugly bear, I’ll turn you into a rug! ”

He called Joe Frazier  an “Uncle Tom” a “gorilla” and  said he was “so ugly he should donate his face to the US Bureau of Wild Life.” — Ali was a terrible loser and an even worse winner. His genius in and out of the ring was blazing hot and unmatched in the world of sports, but when he was fighting, Muhammad Ali was no sportsman. He was a brilliant athlete and boxer, salesman, Muslim, comedian and human being but he was not the Ambassador of Sportsmanship.

Still, despite his showboating and poor manners, I do love Ali. I have loved hims since I was eight or nine years old.

Last night, while staring at the box of Wheaties and Ali’s pretty face I realized I’ve never written about the  extraordinary day I met Muhammad Ali. My poor kids have heard the story, over and over, because that’s what McDaniels do…tell stores. But I need to write it down so it’s in the books.

When I was a skinny eight or nine year old, my brother, Granger, my mom and I flew to Boston to watch my other brother, Jack, graduate from prep school.

Granger was a gorgeous, golden haired, 19 year old and he had a full leg cast because he constantly totalled my parents cars. He was on crutches and grumpy all the time.

My mom left Granger and me at the airport terminal with the luggage while she returned the rental car. It was Spring time. Back then, in the late 60’s, little girls  got very dressed up to fly in an airplane. That day, I wore a a baby blue dress, white tights and white dress shoes. I was miserable and to make things worse I had to drag the luggage as I tried to keep up with Granger on crutches.

Suddenly Granger stopped and said, “Do you know who that is? Look down there.”

I didn’t know or care. But Granger was really excited.  “Good God, Pooh Bear, that’s Cassius Clay,” then he corrected himself. “Muhammad Ali!.” He looked at me. “The heavy weight champion of the world. Come on!” He he took off like a Thoroughbred on his crutches, galloping  across  the enormous Logan Airport and I started dragging the suitcases, trying to keep up. I stopped once and tried to figure out who he was chasing but all I could see was a great big group of dressed up black people. I readjusted my grip and trudged on.

By the time I reached the group, Granger had already introduced himself.  I stood behind him in awe of the group.  I had never, in my life seen so many gigantic black people, all dressed up. Ali was surrounded by several body guards in dark suits and they all towered in front of me like Red Woods.  And their was a lady in the group. I was transfixed because I had never seen a gorgeous and fancy black lady. She seemed to shimmer in front of me, like a goddess and I was speechless until the largest of all the men stepped in front of me and said, “And who are you?”

I started to say something about Granger and his crutches but Ali stopped me. He nodded at one of the other men then told him to take the luggage for me. At that moment I didn’t know who Ali was but I loved him cause he made those men take the damn bags off my hands. My fingers still ached.

Quickly, he scribbled his name on Granger’s cast then said, “Kids, I’ve got to go before the press finds me but you take care of your little sister, Granger.”

And I still defend him today, though his  philanthropy and humanitariandedication have made him unmatched in the world of sports.  He doesn’t  need my defense. But I will always think of Muhammad Ali as my friend…was he an Ambassador of Sportsmanship? Well….I’ll reconsider that in a few years.

*****Please tell me what you think.  I’m spilling my soul here. Comment or write to hampoalnd@gmail.com