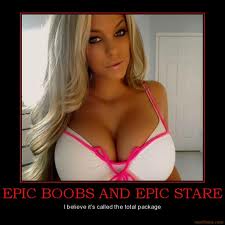 Very few body parts have as many nicknames as breasts, so hey must be important. We call our hands…hands, our shin is just a shin. But breasts are boobs, ta-tas, boobies, hooligans, the girls, the list goes on and on. Jugs and Hooters, wait, we love boobs so much we have restraunts dedicated to them.  No other body part can make that claim.
Yesterday I heard a program about breasts on NPR (figures, right?) and I learned some fascinating stuff.

Breast size in America has increased considerably in the past ten-twenty years. Double D used to be the largest size, now it’s something like Triple K. Still breast augmentation is the number one plastic surgery performed.  300,000 women get boob jobs every year!  But fake breasts only have a shelf  life of ten years!  I thought they lasted forever. But after ten years your supposed to have them checked out and maybe redone.

Little girls in America are getting breasts at a much younger age. 30 percent start showing up when they are just nine years old. There are several possible reasons for this early delivery. Lots of little girls are heavier now and if you are overweight you develop at a younger age. Chemicals, not just in our food, but in almost everything we touch may be to blame.  There is a chemical in most plastics that acts like a fake hormone.  It’s in our computer mouse, water bottles, car interiors. It’s pretty hard to avoid. And finally, girls who don’t live with two blood parents tend to develop earlier. I think that reason is really fascinating.

Breasts are considered organs and after the skin, they are most likely to get cancer.  It’s all that fat, just hanging around and absorbing toxins.

No pair of breasts are exactly the same size and generally the left is bigger than the right, but nobody knows why.

And finally,In Hong Kong, you can get a degree in Bra Studies from the Hong Kong Polytechnic University where they teach you how to design and build a bra.

In our house “nipple” is one of the funniest words you can say.  If you say “nipple, nipple, nipple” half my family rolls around giggling.  My husband wanted to name the cat “Nipple” but was voted down.

I think it’s great that so many men are dedicated to breasts. We have something they don’t and they love us for it. But guys, you still need to work on looking women in the eye instead of staring at cleavage when we are trying to tell you something really important. Thanks.

Yesterday I heard an NPR story on the teenage brain. Those kids are crazy, but now we know why.

I have two  fairly famous sayings about teenage boys, they go like this. 1.”Teenage boys have more bad ideas in sixty seconds than the rest of us have all week.” (Example, launching water balloons at the police station.)

2.  “As boys turn into men, around age 30, they figure out that it’s not a good idea to act on all those bad ideas.” (example: don’t try to jump off the second story balcony into the hotel pool)

Well according to the NPR story I was both right and wrong. Teen brains understand  and recognize bad ideas just as well as frumpy 50 year old housewives but, they don’t exaggerated it the way  the grown up brain does. Grown ups tend to think the world is a dangerous place and really bad stuff will happen if we get out of line.

That’s not how teens see things. So their decision to do wacked stuff, like jump in the spider monkey cage at the zoo, isn’t so unreasonable.

The adult thinks, the spider monkey will bite your lips off and put poop on your head, don’t get in there!

The teenager thinks, the spider monkey will sit on my head and my friends will think I’m awesome.
The teen brain knows driving fast is dangerous, but the rewards are more important. The teen boy knows if he drives 118 miles an hour his girl  friend might secretly think he’s hot and his buddies will think he’s crazy.That means a lot to the teenage brain, because it needs positive reinforcement and social acceptance.

Adults think, “if I drive 118 mph I’ll probably die, or worse, I’ll get a ticket and my insurance premiums will double.” There’s not much reward, so we don’t do it.

Holy cow, this explains a lot. Teen-agers aren’t idiots, they are just different. I’ll try to remember that next time I see a bunch of kids riding a 4 wheeler, in their boxers, during a snow storm. (Yes, that does happen in my neighborhood.)

1. The next blog will be a commercial. Sorry.

2. checke out my other blog http://www.goofyandgreat.blogspot.com/

3. Does anyone know about Kindle e-books? Some folks have suggested I write one.

*I don’t really care about Arnold Schwartzenegger’s Love Child or House Help. Apparently the 13 year old boy looks just like him, how cool would that be?

*I don’t care much that M-Bone, the rapper who invented The Dougie, was killed in a drive by (his real name was Manta Ray, why go by M-Bone)

And I think it’s funny that the Obama campaign is selling  birth certificate t-shirts. I kind of want one.

So, what do I care about?  Coffee dammit. That’s right a cup of Joe is number one on my list today. I heard a story on NPR this morning that really lit me up.  New studies are in on the health effects of  coffee and let me tell you, it’s good news.  Coffee is amazing stuff that helps fight cancer.

One of my grandmothers used to tell me coffee would stunt my growth and thus prevent me from getting a husband. Ha…Bubba, you were wrong.

A Harvard study tested 5,000 men who drank coffee and found

* “their risk of getting this bad form of prostate cancer was bout 60 percent lower compared to men who drank almost no coffee”!

*Earlier research suggests coffee reduces the risk of diabetes, liver disease and Parkinsons”! Yeah, fill up my cup one more time. I don’t can how badly my hand is shaking.

*Swedish researchers reported that women who drink at least five cups of coffee a day have nearly a 60 percent lower risk of a particularly aggressive breast cancer.”

Bottom line…if we drink coffee all our private parts seem to be a little bit safer.

Tomorrow’s Blog…Are Politicians and Famous People more likely to have an affair….HELL YES!