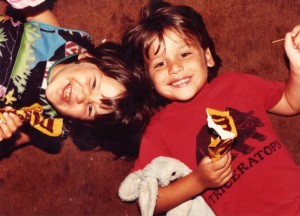 I recently read something that said husbands and wives get bored with each other because we never change.  But we never get “bored” with our kids because we expect them to change constantly and that’s what they do.

This isn’t an earth shattering revelation but man is it a true statement.

My husband, Alex Hampo is the exact same man he was when we got married.  He works too much, smokes too much and doesn’t take care of himself.. He loves his family first and foremost, in fact he really doesn’t like anyone but our family. He’s fearless and hates confrontation unless it’s in his kitchen.  Then he’ll bow up on a bus or a big ass dishwasher.

My kids, on the other hand are lava lamps. The change is constant.

Growing up we all felt pretty certain Mary would eventually be a lawyer/political figure. She was addicted to Murder She Wrote, loved to argue…dramatically and was passionate about all kinds of political topics.  When people would make ugly remarks about lawyers and politicians, trying to discourage her I told her time and time again, “A good attorney or lawyer can do more good in a single day than the rest of us can accomplish in a life time.”

Then she got to college and things changed.  Mary was all about non-profits and saving the world through the  .org people. She even considered starting her own organization that made birthday cakes for little kids in shelters. Her non-profit passion lasted for five years. Now she’s sick of non profits and more than a little discouraged by their sense of entitlement and  lack of hustle.

Next week Mary starts a new job with a law firm and is more excited than I’ve seen her in years. She’ll be a Litigation Specialist . I’m not sure what that means but at twenty six she now officially has a job that sounds way more important than mine.

Jack went to college to make me happy. He graduated, handed me my diploma and started his life.  He’s always been exceptionally good with money For six or seven years now Jack has worked as a bartender and manager at some of the best known bars and restaurants from Manhattan to Nashville. He makes huge money for a young man. He dates beautiful women and is able to buy himself anything he wants from electronics to expensive tennis shoes.  But what Jack really loves to do is save his money and go on grand adventures. He goes surfing in Puerto Rico, hiking in Hawaii, he spent a month just hanging out on the beaches of Belize and swimming with manatee. He roams the globe from Turkey to Kentucky.

Last November jack called to tell me he wasn’t coming home for Christmas this year.  We were all shocked. Jack loves Christmas with the family. He explained he’d decided to host a dinner for all the homeless men in his Nashville neighborhood. He’d enlisted lots of local restaurants  to help, there were goodie bags with socks and gloves for the guys who showed up. And he had lots of unlikely volunteers who really wanted to help too. Bar people, who don’t normally volunteer, but were suddenly touched by the power and magic of giving to others. He called me Christmas eve so excited , so full of stories about serving these homeless men I just listened and cried.

Jack, the money making glob trotting man is now working on a way to create a Non-profit that connects unexpected volunteers with projects they can really get behind.

Jack and Mary have flip flopped and it’s absolutely spectacular. Nothing boring about it. I just want them to find their joy in life.

And Alex, maybe he’s changed a little.  He doesn’t mind if I buy crunchy peanut butter anymore and he’s learned how to text like a teenage girl. “I luv u”  with a little winky face. That’s progress.

If you like this story you can get a whole book full for just $2.99 on Amazon!