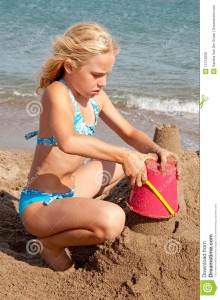 Lex and I were lying in the soft, white sand, listening to the waves and seagulls. when a  family started hauling plastic buckets and shovels in our direction.  A young mom and dad dutifully  followed their seven or eight year old daughter in a sparkly pink two piece swimming suit. She looked adorable.

The parents plopped down into the sand then the little girl put her hands on her skinny hips and said, “Chop chop people this sand castle isn’t going to build itself.”

Lexie and I looked at each other with ” Oh my Lord, did you hear that?” expressions.

They all worked on the castle like Egyption slaves building the pyramyds for a few minutes then the little girl flung her pony tail back and forth and pointed at her smiling mother.  “If you’re not going to do what I say, you’re fired. Totally fired, get off my construction sight.”

The mom smiled and kind of laughted then walked away. She glanced at her handsome, shirtless,  husband, who did nothing, then she  sat down in a chair twenty feet away. She was smiling and then it became obvious she was nearly in tears.

First, I want to say I was so disapointed in the dad.  Why didn’t he stand up to his nightmare of a drama queen daugher and say “You can’t talk to your mother that way.” Instead he kept trying to laugh it off and he did as his daughter said. (That’s called being a slave.)

They kept working together for a few minutes and everything the girl did the father praised as though she’d discovered the cure to eboli.  It was stupid how they were sucking up to this kid.

The parents didn’t know what was wrong with their daughter, who continued to boss her dad around.  But Lexie and I knew precisly what was going on. She was a bitchy little Disney Channel kid.

If you watch the Disney Channel you will see countless adorable and beautiful little girls who are bossy, mean and narcissistic.  They talk to their mothers like they are idiots.. They treat their tv fathers like they are morons, and everyone claps and laughs.

The truth is. it may be kind of cute when they are little and percousis,  but you are raising a monster.  First it’s the sandcastle, then your daughter will look at you in Macy’s, roll her eyes, and say “can you hurry up and pay the woman?” and then when she’s seveenteen she’ll put her hands on her skinny hips, roller her eyes and say, “give me the keys now, I don’t want to wait anymore.”

That’s what the Disney girls do all the time. They are mean-spirited, aggressive, rude and they love to start fights and boss adults around.  Maybe  this all this started out as a way to balance the self esteem issuewith little girls….. but it’s back fired.

Because of Disney and Nickelodeon girls,    we are raising a generation of girls who are spoiled, bossy, mean and bratty.They will be unemployable in their twenties (because they won’t tolerate a boss) and what man will want to marry such a bossy bitch?

Parents you are not alone. If you are in your twentys or thirtys you  need to stand up, turn off Disney and Nick, tell your  girls “yes you are pretty and smart but NO you are not in charge.” If you don’t don’t have the guts to do that you will have to  deal with the oncoming nightmare of an unemployable, unmatchable, intolerable bitch of a little girl. They are beautiful but doomed.