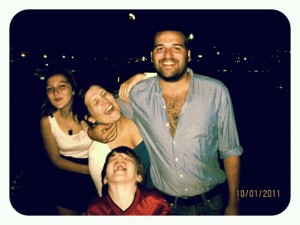 I’ve been blessed with some awesome and bizarre stuff. God loves me, I know because he’s given me a few things most people don’t have..

1. I have really great legs. Yeah, I work out a lot and do hundreds of kicks in Taekwondo ever week but I have my mother’s legs. Mary and Lex got them too. We have great definition and generally don’t get cellulite, fat thighs or big hips, even when we put on ten or twenty pounds. (Sadly though, our butts are kind of flat). Because of my mom, we don’t store fat in our thighs. And we have nicely shaped calves and ankles, no “cankles” for us or chubby knees. Our fat goes to other places and that’s wonderful because It’s really hard to exercise your ankles and hips. Our legs are a genetic gift from God and my mom and I am thankful.

2. God blessed me by making me a McDaniel. And three of my children are absolutely McDaniels too.  We’re still waiting to see if Sandor develops the gift of friendly bull shit.  Being a McDaniel means we can snuggle into any group of  people from senators and presidents to garbage men and rednecks.  We can happily visit with just about anybody, we like almost everybody. It’s very difficult to make us feel out of place, because we know how gifted and wonderful we are. Oh, and we have an absurd amount of confidence so we assume people will love us, because we are McDaniels.  Generally, McDaniel’s are also magnificent story tellers. Some people say we are natural liars, but we like to think of ourselves as gregarious raconteurs. We like to put a positive spin on things.

This is where I should mention my husband, Alex.  I’m blessed with a man who puts up with us even though he often times doesn’t understand. he rolls his eyes a lot and wonders what we will say next.

3. We laugh all the time.  This is also part of the McDaniel blood line. We howl and giggle and hee-haw with laughter even when things are really really bad. We laugh when we are miserable and broken hearted because God blessed us with the ability to see something funny in almost every situation, from cat poop on the new carpet to family funerals. Thank you Jesus. Again I have also been blessed with a husband who doesn’t always understand why the hell we are laughing but he doesn’t tell us to shut up.

4.  God has blessed me with the most wonderful and naturally happy children on the planet. They all like and take care of each other. They are all playful and respectful, smart and really really fun to be around.

At least ounce a week (I’m not making this part up no matter what I said in the previous paragraph) someone asks me how I raised such wonderful and smart kids. (so far I haven’t had to write a single check for college)  I just say “thank you they actually came delivered that way”. And it’s the truth.

We have plenty of flaws. We tend to be a little vain, with terrible handwriting and none of the kids are over the top athletes. Hard work is required for their  on field successes. But for the most top I am blessed beyond words.

I have a theory why God has given me four such extraordinary children. He has a good plan. But I’ll save that story for another day and just be thankful for what I have right now.

When I was little my best friends were Louella, Liz and Mike, my cousins. Actually they were my only friends. When Liz was seven, I was six and Mike was five we caught a giant catfish named Big Willie. We didn’t know what to do with him so we dragged him back to my condo and put the bastard  in the bathtub. We let that 10 pound monster swim between ournaked legs until Louella, our friend and maid, walked in and started screaming. Then we all got spanked.

I was jealous because Liz and Mike had a pet pig named Charlie Brown. he was a really big pig, not one of these hot dog size pygmie things. Liz would climb on board the 300 pound beast, Mike would pull his tail and off they would go. Both Liz and Charlie Brown screaming across the pasture.

Mike was a tiny kid who looked like a redneck made man in the mafia. And we would fight, I mean really fight, like midget wrestlers, all the time. Once, when were were five and six, we climbed the tree in front of Mike’s house. Then we started arguing. What could we argue about in a tree? I don’t remember but something got us going.

Eventually, we started throwing punches and trying to choke each other, on a branch… in a tree. We were screaming and our teenaged brothers, Ricky, Bimbo, Granger and Jack came out to see what we were doing.

They started laughing at the Arkansas spider monkeys fighting in a tree. Then Mike threw a haymaker and we both fell, ten or twelve fee,t onto our backs. The fall knocked the wind out of us both and we lay there, under the tree, thinking we would die. Gasping, flopping and clutching our bony chests. Of course that only made the brothers laugh harder. (I’m pretty sure there was beer involved)

Cousins, we all grew up in the same, insane universe. We understood everything about each other without speaking, because we were all born and cut from the same rough, misshapen fabric. We were family. We had the same blood and nothing is more profound. Time and history doen’t matter if you are cousins because you share the same DNA and history, they are woven together, like an Indian braid, inseparable and unbreakable.

Twenty or thirty years passed and I hadn’t seen or spoken to Mikey and Lizzy but the moment we were together again, the moment our voices touched, we were bonded, thick as thieves, intertwined by a blood line so powerful and unique no one else could understand or interfere. If Mikey or Liz called me today and asked me to drive 3,000 miles to pick them up in a truck stop there is nothing that could stop me. Because it’s been so long I might not recognize them when I got there but we would find each other and do what needed to be done.

We are family and together we will walk to the magnificent , golden gates of Heaven or the torterous  fiery gates of Hell… together. Our past is the same and our future will be too. Because we are family, we are  cousins and we will always be together. Always.