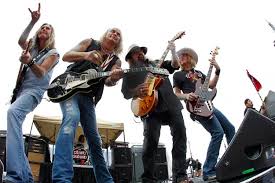 When I was thirteen years old my first “big love” that included making out was with a boy who was a senior.  We were students in a prep school in Tennessee and his name was Plez Bagby (Pleasant Harwood Bagby III I think)  He was from Virginia, he was a gentleman and I really liked kissing him.  He was also the drummer in a rock and roll band. They played Free Bird (of course they did)

When Plez and I broke up I spent hours pining away to Free Bird. So loud and heartbreaking, “If I stay here with you girl. Things would never be the same.”

A few years latter, when I was in high school at Boca Raton Academy my dad made me drive a massive chocolate collared 1976 Thunderbird. We listened to Lynyrd Skynyrd nonstop for two years. When Gimme Three Steps came on I’d roll down the windows, hit the gas and howl. We listened to so much Lynyrd Skynrd in face I named the car Lynyrd.

There were a bunch of kids at my house when we heart about the plane crash that killed three band members. A palpable wave of sorrow gripped us and a big piece of our idyllic teenage world darkened.  It didn’t seem possible or fair or real.

For kids in the south the music of Lynyrd Skynyrd ran through our bone marrow. We loved The Police and Bob Seger and Aerosmith but Lynyrd Skynyrd….those were our boys. And for some reason that feeling continues today. When I’m feeling nostalgic for the old days I’ll listen to the brilliant  Bob Seger “Live” Bullet album. But Skynyrd still gets just as much play in my world as all my new favorites.

A couple of years ago Lexie was asked to do a musical Taekwondo demonstration at her high school.  After much thought she worked out a kick ass routine to “Gimme Three Steps”. It was awesome and the rural Arkansas crowd went wild. Clapping and cheering….for a Martial Arts routine. That’s how much power Lynyrd Skynyrd has.

When I drive my eleven year old son to football games on Saturday morning there’s one song he and his friends want me to blast, over and over. Sweet Home Alabama. I don’t know why it just works for them, fills them with joy and power and a sense of righteous victories.

And now I’m going to say something may will find sacrilegious . The first time I heard Natural Outlaw’s song Mississippi all I could thing was “Lynyrd Skynyrd”. It starts out deep, like the river, “I am a man who takes care of my own” then the song flows to New Orleans and  explodes with guitars and drums and key boards. There is so much pain and passion and truth in the chorus, “I don’t want to rule the world, I just want some peace.”  There I sit, a middle aged white lady, in traffic in my ancient white Nissan, singing as loud as I can,  “And I won’t stop till they lay me down oh that river she takes me.”

The song is huge and gritty, raucous and dark but it speaks to something in all of us. It doesn’t’ matter if your an corporate executive, a homeless man, a ditch digger or a house wife. We all have to keep going, like the Mississippi and we’re all just looking for a home and some peace. http://www.reverbnation.com/naturaloutlaw . Recently I listened to the band play the song live, they were painfully loud, I looked over and my husband had teared up. I hadn’t seen the man cry in four years. But soumthing about the song, about looking for peace hit him hard in a rock and roll kind of way.

Mississippi reminds me of Lynyrd Skynyrd’s Simple Man, That Smell and Gimme Back My Bullets.  And it just tears me up because it has a Lynyrd Skynyrd invisible quality I can’t describe. All I can do is sing along.

“Miles and miles and states and states, she swims on course. I don’t know if I have it in me to swim with that much force.

Go on and listen. http://www.reverbnation.com/naturaloutlaw