I’ve been told by a few romantics that it’s time for another Hot Springs love story. Telling these makes me feel like I’ve been eating whipped cream. And that’s always good.

Imagine Hot Springs, Arkansas in 1934. The country was depressed and stuck in a black and white mentality; but Hot Springs, Arkansas was rolling.  Hot Springs was awash in cash, gangsters, bath houses, liquor and gambling. But none of this lascivious fun effected my parents who were 9 and 10 years old in 1934. And they were already in love.

My dad, Irven Granger McDaniel, had a problem. He lived on Whittington Avenue and his family was struggled throughout the 30s. My mother, Ann Stell never suffering in the least. Her daddy was a surgeon and they had just finished building a lovely house on Prospect Avenue. Prospect Avenue and Whittington Avenue were seperated by West Mountain, part of Hot Springs National Park. That’s the only thing that stood between Ann Stell and Irven in 4th grade.

West Mountain is a lovely and graceful little mountain. It’s not very tall but it is pretty steep and completely overgrown with pine and hardwood. Still, two or three times a week, after school, my dad had to go see the love of his life. So he would literally run over the mountain.  He always told us he followed deer trails he found and the trip would take him about an hour if he actually ran. He figured out exactly how to land in Ann Stell’s back yard.

So, imagine a grubby little 10 year old boy emerging from the woods, then ringing the back door bell of a lovely white two story home.  That was Dad.

My grandfather, the surgeon, wasn’t really pleased by the little boy’s arrival.  He didn’t want his pretty  daughter playing with the smiling but rough cut kid all the time. So he told the maids (there were two at the time, one to cook and one to clean) not to let Irven in every day.  They had to tell him Ann wasn’t home or was busy, so he would run back into the woods and over the mountain.

Well, telling the friendly love sick little boy this story broke their hearts. The maids felt sorry for him. He worked so hard to see Ann and he had such a big friendly gaped tooth grin.  So, on the days that he wasn’t allowed to see his love Ann, the maids made sure they left a plate of milk and cookies on the back porch, so Irven had enough strength to run back over the mountain before dark.

My dad died when he was 52. But before he left, he told us to pour his ashes on West Mountain because he’d always be there…. running to his girl.

Alex and I have never had any money. I grew up with plenty plenty but married life with four children is a different story.    Alex, is not a sentimental of mushy man. I bitched constantly for the first two years we dated because we didn’t have “a song”.  He finally picked something wretched by the Red Hot Chili Peppers. It was worse than no song , so I shut up about the song.

So, Alex doesn’t have any money but he still manages to show me he loves me everyday without using any cash. I’m sure he would go shopping for me but we need groceries more than a tennis bracelet or dinner at Out Back.

The number one way I know Alex loves me (drum roll) he doesn’t roll his eyes too much when I have a crying meltdown right before bed.

It’s the middle of winter and he still doesn’t whine when I want a fan in our room. I need the white noise to sleep, so he just burrows under another quilt and lets me have my whirling fan.

He encourages me to work out, even at night, because he knows I’ll feel better.

And finally, I know he loves me because he encourages me to keep writing this blog. He even reads it most of the time, though I don”t think he remembers to click.

So, folks, if you have someone in your life who loves you, make sure you take note of the little things they do everyday to prove it. I think, when it’s eleven degrees and there’s snow on the ground taking out the garbage without bitching and whining says “I love you” just as much as new ear rings. 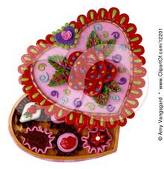 After reading my friend Cara’s blog,http://jereandcara.blogspot.com/2011/02/old-people-at-valentines.htmlabout old people and Valentine’s Day I thought I better write something that wasn’t GROSS! She hates VDay but was moved by an old guy at Walgreens.

So, in 5th grade Irven got a job working in a drug store after school and on Saturdays. Three weeks before Valentine’s Day they put up a giant red heart display in the window. The centerpiece piece was a massive heart shapped box of chocolates.It was covered with ribbons, bows and shiny stuff.  Two pounds of chocolate. Irven thought it was the most beautiful thin he’d ever seen. And so he decided  he was going to save all his money and buy the giant and glorious box of chocolate for Ann Stell because he planned on marrying her someday.

For three weeks he worked extra hours and saved every penny. He even told his mom he made less than he did so he could squirrel away money and buy the chocolates for Ann.

On February 13th he counted out all his money and paid for the massive shimmering box of chocolate and on Valenetine’s day he carried the enormous heart shaped gift a mile and a half to Ann’s lovely colonial style house on Prospect Avenue.

He range the doorbell and smiled at the maid, Iolla, when she opened the door.

Ann bounded down the stairs smiling with her thick glasses and beautiful but simple plaid dress.

Without saying a word Irven extended the heart shaped box of chocolates and grinned. He thought he would say “Happy Valentine’s Day,” but couldn’t speak so he just smiled.

Ann didn’t reach for the heart as Irven expected, instead she just shook her head, kind of saddly and said, “I’m sorry, my mother doesn’t let me eat cheap candy but you can come in if you want.”

Ann smiled sweetly and said, “See you tomorrow,” then closed the door.

Irven was so devastated he didn’t know what to do. Finally, he walked down the 14 steps that lead back to the street. He sat down on the Prospect Avenue curb and sighed, then he opened the chocolate and started eating the two pounds of “cheap chocolate.”

Thirty minutes latter, his stomach started rolling and then he threw up two pounds of chocolate on the sidewalk in front of Ann’s house.

Mom always said this story wasn’t fair. Dad was a brilliant stroy teller and she couldn’t even get the punch line of a joke right. So, throughout their 30 years together she always sounded like the bad guy.

But that’s love and perspective. As the old adage goes, there is your version, my version and the truth.

Happy Valentine’s Day! Be Kind and tell a friend if you like the story.