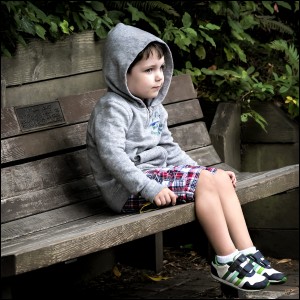 I have a little Taekwondo school. And a few weeks ago a mom and dad walked in with two little boys. One was a round, noisy and silly five year old the other a skinny and silent nine year old named James.

We did lots of kicking and punching drills and both boys did just fine. The youngest one laughed and squirmed and fell down when he tried to kick. But James never made a sound, he barely made eye contact and his expression was completely stoic, as though he’d checked out. He tried to do what  I said but there was no joy or goofiness in the boy. His eyes were vacant.

Because I can be very immature I can generally get a nine year old to laugh…but not this kid.

Both boys came back for two more classes then signed up. My daughter was, Lexie, was teaching while I talked to their mom.  She told me the story.  They adopted James a month ago. His mom was a junkie and died from an over dose. She used to shoot up in front of James. When James did something wrong (which I couldn’t imagine because he was so meek) they whipped him with a switch with stickers on it. Tore the boy up.  And because she was a junkie she didn’t get him to school on a regular basis or learn to read. As a result he’d failed two grades and didn’t have friends.

He spent some time in a foster home before being adopted.

Since he’d been with his new family he hadn’t smiled or laughed or cried, even over his mom’s death. He’d been sweet and polite and obedient but that was it. We finished talking then I went out on the floor to work with the kids.

After a few minutes I said “Who wants to grapple?”

I had six little boys that day and they nearly exploded and yelled “we do!!”   Grappling is simply wrestling but they start from their knees. And all little boys love to grapple.

I used my ring announcer voice, “First up we have Jason and Hunter.” They are both tiny six year old boys.

They knelt in the center of the ring, shook hands and said, “Good luck sir.”

Then I said my typical silly stuff. “Remember men, no biting, no licking and no hair pulling. Begin!”

For two minutes they rolled around, pinning each other, squirming free then starting all over. The other boys cheered and coached.

“Ok, just do what those guys did. Try to push Martin down and pin him. Ok?”

He just nodded and I said, “Begin!”

The two boys latched on to each other, pushing and pulling, trying to get the other to go down first.  James’ new parents leaned forward in their seats watching intently.

Then James went down and the other boy tried to hold him there. And that’s when it happened. I suddenly  realized James  was giggling and smiling…because he was playing. I looked back at his parents to make sure they saw what I was looking at. His new mom was nearly in tears.

After class I high fived the guys but James ducked under my hand and gave me a sideways hug. And he smiled again, as though the breaker switch had been flipped.  Smiling was ok. And playing was awesome. Sandor and I talk about this all the time, especially after one of his friends makes up some absurd and ridiculous story.

Last week Sandor and Hunter got into a minor argument because Hunter was telling everybody in fifth grade, “when you get the flu shot a tiny piece of the needle breaks off in your arm. That’s how the medicine gets in you.”

His friend Cody has insisted for two years that his dad played for the NBA. I’ve seen Cody Dixon’s dad, he’s short, round and smokes generic cigarettes.  Maybe he WENT to an NBA game but he did not play for the NBA.

Half of Sandor’s cheerful redneck  friends claim they are related to Eminem or Labron James.

They just lie about stuff non-stop. We inadvertently  set Sandor up a few years ago so he’s included in the category. We had a post card of Albert Einstein hanging on our fridge.  Sandor noticed he had crazy caterpillar eyebrows like Alex .  So we told 3rd grade Sandor , Albert Einstein was his great great uncle. He believe us.

This morning it happened again. I was telling Sandor and Lex about the Ukrainian president. After three months of violent protests he gave up and ran away to a Russian military base. Now the protesters are giving tours of the luxurious Ukrainian capital and estates.

Sandor stopped eating his pancakes and  said, “So Obama ran off to Russia?”

“No, The Ukrainian president did that. Not our president!” I laughed.

“Oh,” Sandor sounded a little disappointed.  “I was gonna tell everybody at school.”

So that’s how it happens and little boys tell the most extraordinary  lies.

Yesterday I watched my ten year old son roll around on a snow covered trampoline. He was talking to his old Power Ranger action figures. I think he was pretending there were landmines in the snow. It seemed to me the Power Rangers kept stepping on explosives because he would throw them up in the air with a dramatic flair and their arms and legs would fly off.  He was playing.

It occurred to me as I watched the Power Rangers dying that “little boy hood” is just a tiny window. Around the age of three they go from babies to boys. And at age twelve they turn into “dudes”.

“Little boy hood” is when they play with fierce abandonment. They conquer worlds, create complex universes and like blowing everything up. They are different from little girls at this age because they are not so fascinated by the complicated gears of relationships and appearances. They just want to have fun, they run at trees thinking they can do a back flip, they jump on pogo sticks in the snow and crawl under porches looking for grubs and lizards.

During “little boy hood”  they still say one of my favorite phrases in the world, “Mom, come look at this!” Last night Sandor and his friend Kyle said this when they wanted to show me a you tube video of a real Big Foot in Arizona, when they figured out how to jump off the deck backwards and land cleanly on their feet and when Sandor thought he had a splinter in his foot. It turned out to be dirt.

My husband never says with sparkling excitement, “Diana come look at this.”

When my daughters say that, it’s because they want me to look at their make up or hair. But during “little boy hood” they are old enough to find amazing stuff and still young enough to want to share it with their old mom.

It only lasts for a little while, then it’s gone. So I’ve decided I’ll make an effort to jump at the opportunity when he says, “Mom come look at this!” What could I possibly be doing that’s more important? Watching CSI, doing the dishes, folding laundry? I want to share in his excitement and and discoveries while I can. And who know, maybe it’s the real Big Foot on Youtube!