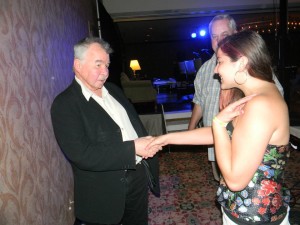 I first listened to John Prine almost forty years ago. I was riding in a beat up pick up truck with my brother Jack. I was in 9th grade and he was in college. He was a big grubby forest guy and I thought he was the coolest dude on the planet. So I listened to John Prine, his first album. I memorized every word to every song.  I thought if I liked it Jack would like me more.

Two years later Jack and my dad were dead.  They died within two weeks of each other. John Prine became the soundtrack for my life.  Songs like “That’s The Way the World Goes Round” and” Where Oh Where Is My Sleepy Eyed Boy” kept me alive.

My highschool friends, who were all listening to Bob Seger and The Police, didn’t share or understand or appreciate my love affair with John Prine so I listened alone. I can still hear and see my best friend Pam Block’s sighs and eye rolls. There was something wrong with me.

When I got to college, in upstate New York, I took a journalism class. We were supposed to interview someone.  John Prine was playing in Ottowa Canada, one hundred miles from my college. I was going to interview my idol and the man I considered one of my best friends.

I made all the arrangements.  The press was allowed to visit with him before the concert.  I had my pass.  We all convened in the locker room of a hockey rink/concert venue. There were probably fifteen reporters there and John Prine stood in front of us, joking and laughing.  Every body started asking questions. I had a list but was absolutely unable to speak. My mouth would not form words. I had a list but I couldn’t read it. I was rendered mute by his presence. I was the only one who didn’t ask a question and he finally looked at me. “You got any questions?” All  I could do was shake my head.

Finally, I was able to stand and stumble out of the locker room as they all shook hands.  The tears didn’t’ start until I was alone.  I sat down in the front row of the concert venue and wondered what the hell just happened.  I was miserable and devastated. Then a young woman sat down next to me. She was whisper thin blonde.  She was either a back up singer or his girlfriend. I can’t remember now. But they were friends and I ended up talking to her for almost an hour. After the concert I drove back to school listening to Bruised Orange.

I wrote my paper about my conversation with her and the things she told me about John Prine. I got an A on the paper and everybody thought the story was hilarious, but they didn’t know the back story and how heart broken I was.

I continued to buy John Prine albums and sing his songs for the next twenty years.  I raised my kids on his music.

When Jack was in college he and his best friend Eddie,  treated me to a John Prine concert in  beautiful Robinson Auditorium in Little Rock.  After the show we waited at the stage door.  I really thought he would magically be drawn to us. But nothing ever happened. Still it was a magical night.

And then it happened. A few years ago John Prine was scheduled to appear at a songwriters festival, organized by Keith Sykes, right here in my home town of Hot Springs, Arkansas, in the majestic  Arlington Resort, a hotel I’d grown up in.  He was gonna be on my turf. It was going to happen. Once again Eddie and Jack got my tickets. They were excited for me too.  As we waited for him to appear on stage, drunk Eddie actually bought him a drink down in the bar!

He’s an old man now. When we first met, forty years ago in my brother’s pick-up, he was a young man. I cried when I saw him.

During intermission we all mingled and then we  him, just kind of standing around. My daughter Lexie and I approached, actually she cut in front of me.  I felt like I was about to see a dear friend I hadn’t seen in years. I wanted to hug him and say,”There you are, I’ve been waiting for you.” Lex stuck her hand out, introduced herself and instead of shaking her hand they did a little dance and I got a picture.  And then he looked at me and said, “Hey, do you know where the bathroom is. I’ve really gotta pee.” I pointed and he was gone.

I haven’t given up yet. Maybe we’ll meet some day and visit for a few minutes like old friends. And I’ll tell him it’s been great knowing him all these years.

“Well, It took me years to get those souvenirs and I don’t know how they slipped away from me.” John Prine