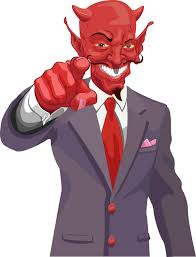 My friend LR  told me more than once, “when you let folks “borrow” it’s best not to expect to get it back.” He always goes on to explain the same holds true for everything from money to lawnmowers. And when you do somebody a favor do it with an open heart, don’t ever expect them to pay you back. That way you’ll never loose a friend or get mad.

Generally I’m pretty good with this rule and it always works out for the best.  But this morning, as I was driving to work in a fifteen year old pick up truck the Devil opened up the passenger door and climbed right into my head. He reminded me that a few months ago I gave my cousin a car, a crappy car, but a car none the less.  I convinced my husband that it was better to give it away than sell it for eight hundred bucks cause we were really helping him.

After a couple of phone calls I never heard from my cousin again. It’s been  six months and there’s only radio silence…. The Devil laughed when he reminded me of this.

Recently, a student I hadn’t seen in seven or eight years called me needing rent money so he and his wife and baby wouldn’t get evicted. I sent him a check and haven’t heard a word since.  I didn’t even tell Alex cause I knew he’d be annoyed.  The Devil shook his head when he reminded me of this incident and said, “Man, Hampo you are such a sucker. You’ll never see that cash again.”

Just a few months ago we decided to sell my daughters old SUV. It wasn’t pretty but it ran well. I convinced Alex we should sell it to a young friend who really needed transportation and let him just make little payments on it each week.  For a month or so things were great then the SUV somehow ended up stuck in the mud down by a creek. They couldn’t  get it out until a tow company hauled it away. Nobody told us this story for a couple of weeks and the impound fees were staggering, six or seven hundred dollars. So the SUV was lost. And we haven’t heard from our young friend since.

None of these situations bothered me in the least, I actually hadn’t even thought about them all together, until the Devil rode to work with me this morning and stole my joy. Please, If you’re reading this, don’t  tell me to pray about everything and find peace.  I’m already giving myself the same lecture. I just hate that the Devil could turn my brain around in just four miles. Before this morning I literally found joy because I thought I helped them a little. Now I’m annoyed and feel used.  Why the Hell didn’t I lock the passenger door and just keep on driving.

But I know what I need to do. I have to start all over, remember LR’s advice, pray and hope Alex doesn’t actually read this blog.