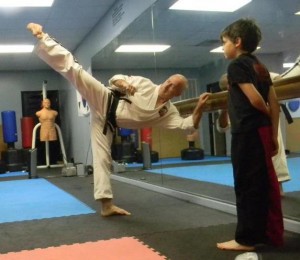 I’m not sure if it’s the human spirit or body I find so astonishing.

Last night I attended  Mary’s second college dance recital,modern, jazz and ballet. It was beautiful, joyous and a whole lot of fun. As we drove back to Hot Springs I thought about the athleticism of the evening. Then of course, I started thinking about our Taekwondo school.

Two years ago when our current instructor, Jim Robinson (a 53 year old sixth degree), bought out taekwondo school, I thought it was the end of my martial arts career. For ten years, the previous owner had pushed us to be powerful and brutal.

Jim Robinson’s style was nearly the polar opposite.  He insisted, even demanded, we be flexible, quick and fluid. He promised the power would come. And as he said over and over, if we weren’t quick enough to hit somebody, it didn’t matter how much power we had.

Being quick and flexible sounds like a brilliant idea unless you aren’t that way. Most of the teenagers in class are naturally quick and it was easier  for them to pick up speed. For anyone over the age of 40 it’s an entirely different situation.

The running joke about my spin heel kick has been, “Yeah, it’s beautiful but you can drink a cup of coffee before it lands.”

Though in his 50s, Jim Robinson is ridiculously quick and flexible. He’s gifted and works harder than everybody else. After watching countless martial artists, young and old, for 13 years, I’ve only seen one or two men who could match his speed. His kicks are blisteringly fast with razor like accuracy. I wanted  to be just a little like him, just a little bit. But doubted that was possible.

When he demonstrated a double and triple lead leg round kick, and said that’s what he wanted from us, I think I accidentally rolled my eyes. Yes, I could kick two or three times, but it’s wasn’t fast. Pretty but slow. However I could do one thing fast, I could get really really frustrated and embarrassed. Why was I so slow and lumbering after ten or eleven years of training? Night after night I cried in the car on the way home after class like a big chicken baby cheese cake.

Fast forward a year and a half.

Half a dozen times I wanted to quit but my pride and the kids wouldn’t let me, even though I was the oldest in the class by THIRTY YEARS. Night after night it’s just me and a bunch of awesome teenagers. Mr. Robinson has been pushing us all to kick fast. Kick low, kick high, kick fast.

“Who? Me?” I kicked again, to her knee then her face,  and I smiled. Yeah, I know it’s easy to impress a yellow belt but it still felt good. There was no “blistering” speed, it wasn’t a McNeeley or Robinson kick, it wasn’t even teenaged boy fast. But my kicks were 100 percent faster than they were 18 months ago.  I was stunned, I was better. How had that happened.

Everyday, I am am amazed by what we can accomplish if we simply refuse to quite. If we try to get better, at anything, we will. It’s simply a matter of showing up and trying…over and over and over again.

And it really helps if we surround ourselves with people who inspire, who push  and shove  and have unbreakable faith  we can all get better.

The secret is you can’t quit. And as my friend Amelia says, “just try to suck a little less everyday.”

Let me know what you think comment or e-mail hampoland@gmail.com