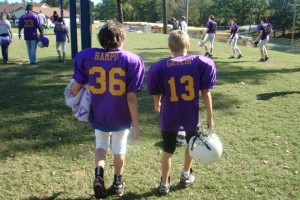 Sandor and Sam are both eleven and on the 5th grade football team. They are both athletic and start most games. But they are not, apparently, the “jocks” who rule the fifth grade at Fountain Lake.  According to the boys there are four or five boys who are on offense  and they think they are really special. All the girls love them, they make fun of other kids and they “act like jerks with swag”, explained Sandor.   Eleven year old with swag, I really want to see what that looks like.

My boys seemed a little depressed by the state of affairs in fifth grade until I said, “Hey, I’ve got some really good news for you.”

“What?” they both appeared in the kitchen.

“Unload the dishwasher and I’ll tell you.”

They got to work and waited for me to give them the good news.

“When you guys get into junior high and high school things are going to change. Right now football is the only game in town so the star  football players are all big and bad and get  the attention. But in a couple of years it all spreads out. There are gonna be super stars in band, in basket ball, in school plays, even in EAST lab doing crazy awesome stuff on computers. All the focus won’t be on just a hand full of jerky football players.”

They stopped unload the dishes. “Really?”

“Sure, think about it. Last night at the Mr. Fountain Lake contest all those guys on stage were really popular but only a couple of them played football. Do you remember who won?”

They both said “Eli!”

“Yeah, Eli is awesome,” one of them said. And they started unloading the dishes again, until somebody burped and the other one laughed and threw a a gross wet sponge. It missed it’s target but hit the cat. The boys then tried to catch the cat to apologize. They never actually caught it but did end up wrestling under a Sponge Bob blanket and I finished unloading the dishwasher.