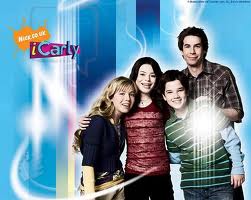 One of the few shows my entire family really likes is….i Carly. Yeah, that’s right, we all love it, a really silly show designed for 10-12 year olds. Even Alex, my husband, who looks like a pirate. Sometimes we come home and bust him out watching iCarly on Nickelodeon all alone.

Last night Lexie and Alex had a major discussion about iCarly relationships. Can Sam and Freddy really date, will it work? They did make-out on camera. But didn’t Freddy and Carly kind of go out one season? How does Gibby, a plump kid who dances without his shirt, get such smokin’ hot girl friends? That’s the stuff we talk about.

Today, while shopping in Wal-Mart I realized I’ve learned a lot from iCarly. First, spaghetti tacos are absolutely amazing. Spencer makes them for Carly sometimes, so we tried them out. Crunchy taco shells stuffed with fettucini and red sauce. The crispy shell texture with the soft and rich noodle and Mariana is sooooo good.

Last night as we were watching iCarly with my oldest son, Jack, who’s 23 and about to drive around the country, we were all stunned when Carly squirted whipped cream on a raw carrot.
“Did she just do that?” Lex asked.
“Yeah, that was whipped cream and a carrot,” Sandor confirmed.
“It’ll be gross,” I said.
But Jack disagreed. He thought the combination might work, so we raced to the refrigerator for the bag of baby carrots and half empty can of whipped topping.
And it was good. I promise you, whipped cream and raw carrots work.

What else have I learned from i Carly? This one is very important. If you have a fairly attractive mid section it’s perfectly ok to walk around with your shirt pulled up, rubbing your stomach and saying, “belly belly belly.”

Go on, you know you want to try it.