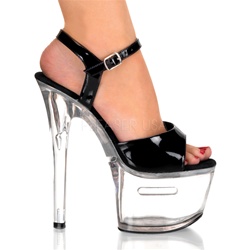 I had a boss once who said, “I like six inches of skirt and four inches of heel”. Or it might have been the reverse. Men like heels.

I had a dear friend, she was extremely wealthy, an artist and brilliant. She told me, “Never wear heels, all they do is slow women down.”

I hate heels but the truth is most of the most powerful women in the world and most of the hottest wear high heels. Lord, that sucks because they really really hurt. That’s actually my only problem with heels. If they felt good I’d be in them every time I left the house because they do look sexy and everyone wants to be taller.

Look at these Jessica Siimpson shoes, they are absurd, ridiculous and magnificent. I would look absolutely ferocious wearing something like this, until I I tried to go up the stairs, fell on my knees, tore up my hose and got bloody palms. Then I’d look like a” zombie mom” instead of “hot mom”.

Women fall so deeply in love with their expensive beautiful high heels.  Last year when my daughter, Mary, was 22 and went to jail for forty five minutes she called and said, “Momma, I’m in jail, it’s disgusting and I’m going to ruin my Jessica Simpson’s”. That was her biggest concern. Her giant blue heels.

So, when you see me shuffling along in some boring, safe and  mundane pair of shoes, I want you to know, in my hear,t I’m really rocking a pair of six inch leopard print stripper heels. And I look smokin’ hot.