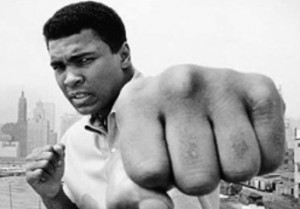 I’m dusting off this story because I’ve been reading Muhammad Ali quotes this morning and watching video of his brilliant and ego ladden fights. He never kept his hands up but man he could move his head. How did anyone ever hit him?

I have loved Ali since I was six or seven years years old because he helped me. It was probably 1967 or 68. I was a skinny , big earred little girl, my brother, Granger, my mom and I flew to Boston to visit my other brother, Jack, at prep school.

Granger was a gorgeous, golden haired, 19 year old and he had a full leg cast on for this trip. Two weeks earlier he’d totalled another family car. He was on crutches and grumpy all the time.

My mom left Granger and me at the enormous Boston airport terminal with the luggage while she returned the rental car. It was Spring time. Back then, in the late 60’s, little girls  got very dressed up to fly in an airplane. That day, I wore a a baby blue dress, white tights and white dress shoes. I was miserable and to make things worse I had to drag all the luggage and keep up with Granger who moved like a ninja on crutches.

Suddenly Granger stopped and said, “Do you know who that is? Look down there!”

I didn’t know or care. But Granger was really excited.  “Good God, Pooh Bear, that’s Cassius Clay,” then he corrected himself. “Muhammad Ali!.” He looked at me. “The heavy weight champion of the world. Come on!” He he took off like a thoroughbred on  galloping  across  the enormous Logan Airport and I started dragging the suitcases, trying to keep up. I stopped once and tried to figure out who he was chasing but all I could see was a great big group of dressed up black people. I readjusted my grip and trudged on. My tights were sagging and my feet hurt.

By the time I reached the group, Granger had already introduced himself.  I stood behind him in awe .  I had never, in my life seen so many gigantic beautiful black people, all dressed up. But in the middle there was a man, laughing and smilling. Ali was surrounded by several body guards in dark suits and they all towered in front of me like Red Woods.  And their was a lady in the group. I was transfixed because I had never seen a beautiful, fancy black lady. She seemed to shine from inside, like she’d swallowed a star, she was a smiling goddess and I was speechless. Then the laughing, talking man in the middle stepped in front of me and said, “And who are you?”

“Granger can’t carry anything because of his crutches. He wrecked moms car…. Ali stopped me. He nodded at one of the other men then told him to take the luggage for me and carry it to the check in counter.. At that moment I didn’t know who Ali was but I loved him cause he made those men take the damn bags off my hands. My fingers still ached.

Quickly, he scribbled his name on Granger’s cast then leaned down, kissed me on the cheek  winked again and said, “Kids, I’ve got to go before the press finds me but you take care of your little sister, you hear me Granger?”

And I still defend him today, though his  philanthropy and humanitarian dedication have made him unmatched in the world of sports.  He doesn’t  need my defense. But I will always think of Muhammad Ali as my friend. And someday, when we meet again, here or in heaven, I ‘ll give him a big hug and tell him I’ve been waiting to see him again.