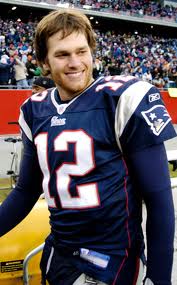 I don’t recall ever seeing a butt-ugly quarterback.  I’m sure there have been some, but not many. No yellow bucked teeth, no Roman noses, no horrible acne.

On the first page of google there were ten articles on the subject of “handsome quarterback” .The Mannings, Tony Roma, Tom Brady, Tom Ryan.  I could go on and on.

There must be a reason. Is it possible ugly guys never ever  have the arm or composure or brains to be quarterbacks?  Only good looking boys and men have all those qualities?

Here’s what I think happens. In grade school there are always boys who are better looking in the traditional sense than the rest. Lots of average looking kids what to hang with that handsome kid because he’s goodlooking, popular and all the girls like him.

Pee-wee coaches notice the little boys are already paying attention to the handsome kid. They assume he must have leadership qualities. He acts like he’s the natural quarterback in the group.

And by now, he’s gotten more experience passing the ball on the playground and in the neighborhoos, than the rest of the kids so he’s gotten pretty good.

Since he’s already pretty good, the coaches spend extra time with handsome boy, refining his technique. And all the other boys listen to him (because he”s handsome and the girls like him).

Sadly,  the coaches over look the shy redhead kid who’s got a blistering spiral and the instincts of Joe Montanna. He’s overlooked because he wasn’t the natural  alpha male on the playground. The other boys don’t pay much attention to him and neither do the coaches. Instead he’s offensive line, when he’s not on the bench.

This goes on throughout jr high, high school and college and the end result is Tom Brady.

Some people think it’s becasue the first coaches naturally prefer attractive athletes but I don’t think that’s the case.  Instead it’s the handsome kids air of confidence and his willingness to boss people around.  Little girls and football coaches eat that up.