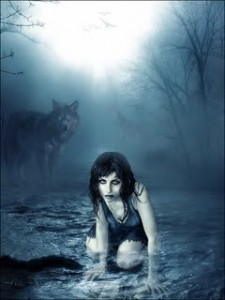 It’s almost Halloween and I’m trying to untangle a rope full of plastic skeletons. And I’m thinking about the various Halloween parties my kids have had over the years.

When you are an “older mom” with lots of kids you get this weird sense of legacy, kind of like Bill Clinton with a lunch box.

I have Jack who is 22, Mary 21, Lexie 14 and Sandor 7. Yeah, I know they are spread out and people always think Sandor is my grandson. But it allows me an expansive perspective and I’ve been through some whacked out parties.

So, our first historic Halloween party took place when Jack and Mary were in 4th and 5th grade. Lexie was a three year old in a frog costume. Because Jack invited all the big kids on his bus we ended up with dozens of teen-aged strangers in our house. Eventually, the police actually showed up at our middle school party. Lexie, the three year old frog, was so freaked she sat down in the middle of the kitchen floor and cried.

The next year things got really interesting with parties and Jack’s crew. He ran with a bunch of 6th grade “players” ….I’m talking about the girls. There was eating, groping and a whole lot of making out. Goldilocks was kissing the werewolf, the cheerleader had her hands all over Dracula. It was very disturbing. Every “Jack Party” party turned into a feeding frenzy with too much tongue. The girls wanted “some” and the boys were excited and  as freaked out as Lexie the frog. Eventually, the boys ran to the house to eat pizza and catch their breaths I think, before returning to the hard core hungry girls.

Mary had Halloween parties full of drama. Her girl friends were constantly in a  different kind of feeding frenzy.  Much to Mary’s dismay, she was caught in the “mean girl” black hole  and somebody was always crying, make- up was running and costumes abandoned.  Inevitably, a pack of girls would end up in the bathroom or out in the yard comforting some crying child who said things like, “You all think I’m fat, he’s going to break up with me, he likes you, not me, I can’t believe I wore this stupid costume”.  And the rest of Mary’s group partied on happily. Then of course the “drama girls” in the yard would get mad at the happy girls for being happy.

At the end of the night Mary would ask if a couple of girls could spend the night and I’d say, “Hell No!” I’m exhausted and we’re out of Kleenex.

And then there is Lexie’s crew. They dance and eat and laugh. If I put on the Macarana, a 1-2- Step or Cha Cha Slide they tear it up. They boys end up playing football in the dark and deadly yard while the girls work on new dance steps. Then they all join ranks around the pizza and make fun of each other.

So, every year I hang the same old worn out decorations but the parties and the kids are all so different. Why? After all this time, do I still think I know what’s going to happen or how they will act?

And Sandor? Well, he’s never had a party here, at the house….I guess well see. Will the police show up, will they all be making out or will they simply eat pizza and party the night away?

I’ll keep you posted. But remember this.  Jack, with all his player girls, graduated from an Honors College last spring.  Mary with her crew of drama queens is now pre-med and Lexie is still dancing.  So, eventually…they all find their way. Just remember to blow out all the candles in the pumpkins before you go to bed.