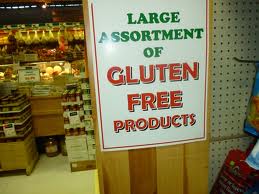 This blog has not been endorsed by any doctor. In fact most doctors would probably tell me I’m an idiot. I don’t care.

This morning, while driving to work, I saw at least three signs that said something like…”We now have gluten free crap.”

Where the hell did all this gluten trouble come from? It’s like cell phones. Ten years ago nobody had one, now everybody has scads of problems because of gluten.

Peanut allergies I understand. We’ve screwed up our food and now lots and lots of little kids have extreme peanut allergies. Twenty five years ago nobody did. I get that.

But nobody is making money off the peanut and milk problems.  I’ve never seen a sign reading “we cater to the lactose intolerant”.  Gluten on the other hand, is the red hot illness/disorder and people are making money because everyone is BLAMING EVERYTHING ON GLUTEN.

As I understan, if you are really gluten intolerant you become very very ill if you consume any.  But people are blaming all kinds of stupid stuff on gluten, constipation, dyslexia, hair loss, sleepless in Seattle, bloating, itchy feet, depression, acne, ugliness, clumsiness  and bad breath.

This morning, I  saw a Smothie King sign. It said “We now have gluten free smoothies.”  Doesn’t glutten come from flour or wheat? Who the hell puts flour in a smoothing, that would be a freakin’ mess in the blender.

I also saw a sign at a pizza place, “We have gluten free crusts”!  Oh my Lord.  I do not want one of those.

A week ago a fast food person asked if I wanted Gluten Free and I said, “no, I want double gluten, maybe triple, pile on the gluten please.”

Gluten reminds me of Mel Gibson.  Mel is responsible for some of my favorite movies, Brave Heart, The Patriot and Signs. He’s brilliant actor and I love looking at him, even now that he’s older.

Gluten  comes in such yummy stuff that’s not really good for me.  Lots of my favorite foods are gluten based, potatoes, pasta and rice.  I love bad white food.

I know Mel has said some terrible stuff lately but I still love him.  People are blaming gluten for everything but you know what? I still love  that wicked stuff.

So Mel, meet me at the Olive Garden and lets load up on  some fettuccine alfredo, Baby.  But watch your temper, please.