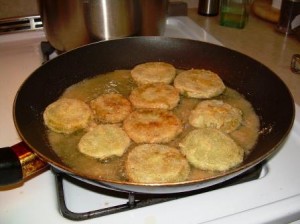 We never fry stuff in our home, well, maybe once a month Alex (the Executive Chef extraordinaire ) will thrill us with some schnitzel, but that’s about it. We sometimes sauté, we grill and bake all the time.

I’m a snob and say things like “frying is for http://www.peopleofwalmart.com/”

Alex was asleep on the couch. Lex was in her room working on AP Chemistry homework and Sandor was at football practice.  No witnesses.  With considerable stealth and shame I glugged a bunch of oil into a skillet, then sliced the green tomatoes.  I found a 1958 Betty Crocker cookbook. (Alex has over 400 cookbooks. strange there wasn’t anything helpful in the Complete Le Cordon Bleu)

I dipped the tomatoes in the heavy, creamy batter, placed them in the hot oil and listened. It was a beautiful sound. When I turned my tomatoes over they were a magnificent shade of brown, somewhere between a walnut and pecan. I placed them on a paper towel and salted. Then, alone in my kitchen, I ate all six fried green tomatoes slices.

They were ridiculously, insanely delicious. I fell victim and slipped into some kind of vegetable oil trance.

The next ten minutes were a blurr. Not only did I slice and fry the rest of my tomatoes, I fried all the mushrooms in the house, two purple onions and a cucumber (that was a bad idea).

When Lex came out of her bedroom to find out what smelled so good she was obviously shocked by the sheen of  grease on my face and batter on my hands. She laughed at me. But I couldn’t stop. I wanted to fry everything, hot dogs, globs of peanut butter…it didn’t matter.

Crack, meth or fried food. It’s all the same. Lord help me.