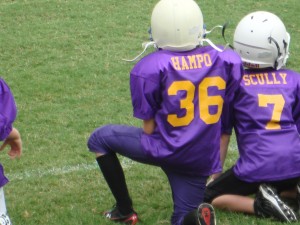 The fourth grade Cobra team lost their fourth game I a row. 14 to 9.  It’s a great team but desperately needs some new offensive moves.

During the game my son, Sandor , had some monstrous tackles, brutal, effective but clean. The game announcer even said his name four times. Sure, they butchered the pronunciation of his first name but they got Hampo right. Still the Cobras lost.

As Sandor walked off the field he pulled off his helmet then threw it on the ground. I was stunned. What the hell was that from a 72 pound linebacker? I caught his eye and nodded toward the helmet. He was wise enough to turn around and pick it up before stalking down the field.

As he walked, coaches pounded him on the back and said things like, “great second half Sandor” and “good game man, you were in there.”

Sandor, who has really good manners, ignored them. I caught up with my boy in the in zone and turned him around by the shoulder pads. “Hey, what’s the matter, you had an awesome game.”

His eyes were red and tears rolled down his sweaty, dirty face. “We lost again, we lose all the time. We’re a bunch of losers.” He was almost yelling.

“And the other team was really mean, they were saying bad stuff about us and they laughed every time one of our guys got hurt. I just want to grab them by the facemask and punch them in the face. They are a bunch of retards.”

I was horrified.  My kid was melting down and acting like a total jerk. Kids who pull this kind of stuff make me crazy. And I think really bad things about their parents because I figure the punk attitude comes from them. I’ve always been so proud of my kids because they were good sports and kept things in perspective.  “Stop, right now, don’t say another  word. You’re about to get in huge trouble. Listen,  Buddy, you can’t turn on your own team. Those are your guys, those are your brothers, win or lose. You’re gonna be playing ball with them for the next eight years. And guys talk trash in football. You just have to ignore them. “

“But we always lose and it sucks”.

“You know what?  You might as well quit the team right now. You have to play football because you love the game and you love your team. If it’s all about winning we should go tell the coach you want to quit. Is that what you want?”

He shook his head and sniveled. “No, I love football.”

“You’re a black belt. You’re the kid who should be telling your buddies to hang in there, not feeling sorry for yourself.”

He nodded as though he understood then climbed into the back seat of the car. Did he hear or understand anything I said? I won’t know until next Saturday morning, after the pee-wee game.  One thing I do know, if we don’t come up with something new for the offense, Sandor’s attitude, sportsmanship  and heart will once again be put to the test.