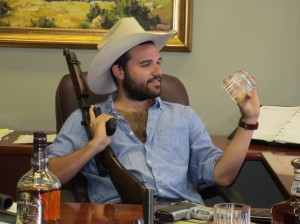 Jack, who is 24, left for Nashville tonight. He left with his truck, a guitar, two pair of jeans and three white tee-shirts.

Fame and Fortune will meet him at the I-Hop. He is a brilliant, handsome talented guy and he’s headed for Nashville in a truck that just started smelling slightly of burning oil.

Lexie was carrying his guitar and tee shirts. She tripped over a dead piece of carcass Theo, the dog, dragged up.

“It’s a dead rib cage,” Lexie yelled.
“Hey Jack, Theo brought you a carcass. Is it the same one from last week?” Alex yelled.
I hit him in the stomach, “You think she asked for ID? It’s a dead animal,Oh my Lord.” I said.

Jack climbed into his trucks and pushed his hat back.
I yelled, “Please, sing happy songs!” He’s been prone to sad stuff lately.
Jack grinned, “Crappy Bongs?” he teased.
“No I said,  sing happy songs.”
“Nappy Thongs?” he yelled back, still grinning.
Alex pushed me, “He always had a way with words.”
And I slapped him in the belly again.

Jack started his truck and backed out of the driveway. Theo picked up his dead animal and dragged it into the bushes, since Jack didn’t want to take it with him.

Jack is going to Nashville. I love him. I guess this is how stars are born.