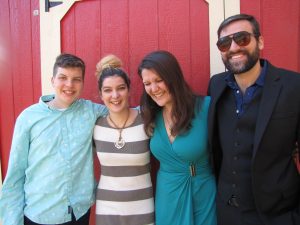 This morning I was putting on makeup. I’ve always been bothered by my chin. When I smile,  my chin leans to the right.  My mom pointed this out to me lots of times when I was little so it always bugged me.

I yelled at my 17 year old son, Sandor, “Hey, have you ever noticed that my face is crooked when I smile?” He’s been looking at my face all my life.

“What are you talking about?” he asked

I walked into his room and grinned at him, hard. He was still in bed, not wanting to get up for school.
“Look! See how my chin goes to the right. And look at these lines. My face is jacked.”

Sandor studied my face for a long time. Maybe 30 seconds. He’s been looking at my face since the day he was born. I’m his mother. “I guess I can see it, but I never noticed. That’s weird.”

He had never noticed this thing, with my face. But I’ve been seeing it for 50 years, because my mom pointed it out when I was a little kid.

Oddly enough, my mom, who was a brilliant amazing women, also pointed out when I was seven or eight that my ears kind of poked out a lot and I had thin hair. Big ears and thin hair.  Mom was constantly trying to figure out how to cover up my ears for church.( I think that’s why I wasn’t in any of the fancy family photos back then.) One day she asked if I would would like to have a little surgery for ear pinning, so they wouldn’t stick out so much. Who asks an 8 year old about plastic surgery?

Lots of times as we ate dinner as a family when I was a little my dad would cheerfully say “Don’t make the girl clean her plate, the fat ones are hard to get married off.” It was a joke. But I still remember it, still quote him. It sank down into my brain, but he was just kidding. 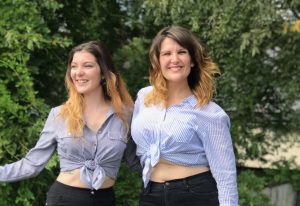 I’ve always had a strong nose, It’s a family nose. Strong. When I was seven or nine my Grandmother, Bubba, who was born in 1895, suggested when we watched tv together I wrap my fist around my nose. So, it wouldn’t grow so much. She had been reading about the Chinese women who wrapped their feet to keep them from getting too big. It was logical. She was trying to help me be more beautiful.

So, I held my nose in my fist, as I watched the Brady Bunch and H.R. Puffinstuff. For 8 year old me, that made sense. My nose was too big and they were trying to help. They loved me.

Now, flash forward 50 years latter. I still kind of hate my face and avoid pictures. But I like my face too. I never knew why but yeah, it’s pretty obvious. But my family loved me and meant well, truly.

But the 60’s were hell, especially for an affluent little girl who was supposed to look “a certain way.”

Young women….you will never younger or prettier than you are right now. Stop hating on your self and your beautiful face. You are 35 right now and so gorgeous, still you think you are ugly, need more work. How will you survive when you are 50? Good God love yourself. Nobody notices your funny chin….except for you. Seriously.

Thankfully, my four children are fine and golden and beautiful. Yes, each have quirks and  unique physical features.  But they are all four are perfect.

Parents, please please be cautious. The comments you make now will haunt your children for years and years. 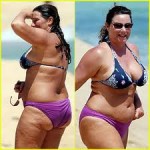 Back by semi-popular demand this is a reprint and because I think it’s really funny. Also I’m reprinting this one because my brother, who says some of the most &%$#*@ up stuff in the world,  is in the hospital. Goodnews though, yesterday he started calling the nurses “darlin'”  so I know he’ll be ok.

*%$#* my dad and brother said.
Yeah, William Shatner has a bad show and he’s a pain in the *$%  who says messed up &!)*, but I think we all have fathers with ridiculous ideas.
My dad, I Granger McDaniel, was a genius, a visionary, a war hero, but he said some *^@% up stuff.
I remember when I was a little girl, sitting at the table with my mom, dad and brothers,I started picking at my food, pushing the peas under the bread, because I was full and didn’t want to eat anymore. My mother told me I had to eat the rest of my dinner and Dad interrupted her , “Don’t make the girls clean their plates, the fat ones are hard to get married off”. Serisoulsy…he said that out loud.

I Granger said some other absurd and brilliant things too, but maybe the two most important comments were a lot easier to follow. My two favorites were, “On any given day, anything can happen”. Think about it. That one is as right as rain. Miricles do happen, unbeatable teams loose, sometimes losers and long shots win. Anything is possible on any given day.

And finally, he would sit on the edge of my bed every night and remind me, “When your imagination accepts it as reality, it will inevitably become the truth”. For crazy people and little girls that’s a powerful mantra. It makes you brave no matter how enormous the enemy; it allows you to dream and believe the best can and will happen. That phrase allowed me to keep faith and hope alive, no matter how disastrous the situation. Obviously, those are re-phrased biblical ideas. My father wanted me to believe, to have faith and to see that everything is possible.

I hang on to my father’s words, all of them, the good and the bad, and too this day, I never ever clean my plate.