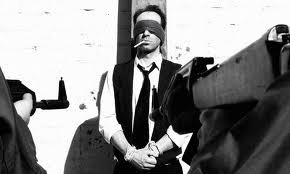 One person can ruin it for everyone. This week Texas decided prisoners waiting to be executed could no longer ask for a special “last meal”.

Here’s the dinner that broke the deal. James Byrd Jr., a conviced murderer asked for two chicken fried steaks, a triple-meat bacon cheeseburger, fried okra, a pound of barbecue, three fajitas, a meat lover’s pizza, a pint of ice cream and a slab of peanut butter fudge with crushed peanuts. All that then he barely ate anything at all. the rat-bastard.

I under stand both sides of the death penalty.  Horrible people who do evil things should be dead. And when we keep them in prison it costs us so freakin’ much money.  On the other hand killing someone for murder is kind of like spanking a child for hitting another kid. “Son, you should not hit people but I’m going to hit you”. That’s stupid.

Another think I know about the death penalty is if I was going to be executed, I’d want a firing squad. Lethal injection sounds horrible. The vet can put a dog to sleep in thirty seconds but apparently when they kill humans via lethal injection it’s a profoundly complicated mixture that has some unexpected side effects.(you poop in your pants1)  The electric chair is horrendous. i don’t want to jump around in a chair and fry like bacon. And in both these situations scientist can’t really tell me how long it takes for my brain to die. yikes, what would I be thinking while millions of volts surged through my body, nothing pleasant I bet.

Pirates did something called keelhauling. They tied you too a rope then threw you overboard. Your body would drag under the keel of the boat and you’d be ripped up by the barnacles under there. Ouch!

But firing squads have been quick,accurate and “bullet proof” for hundreds of years. Give five guys, ten rounds each to pump into my body and I think they will get the job done.

The only other sure bet is beheading but I hate the idea of my head plopping into a basket, or worse still, rolling off the platform.

So, if I have a really bad night, do something terrible and wind up on death row, sneak me in some stone crab and shrimp for my last meal then shoot me down. If I could, I’d thank you.