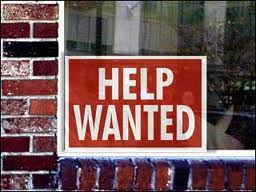 I heard two news  stories recently and they won’t leave me alone. Both were about the job market but with different messages.

Apparently, if you fall into one of two categories it’s almost impossible to get a job.

1. If you have a felony record.

I’m very white and I’ve never been to prison but I’ve got lots of friends and family members who fall into one or both  categories.

According to an NPR story three out of four business require a back ground check and if you have a felony conviction they don’t even consider you for a job. It doesn’t matter how minor the offense, how long ago you screwed up, how qualified you are for the job or or if you payed your debt to society.

So  a woman who is arrested for prostitution or having a small amount of pot when she”s 19 still can’t get a job in most restaurants as a dish washer when she’s 30. Then we complain when she is forced to go on Welfare in order to talk care of her kids.

Obviously,  a woman who steals stuff shouldn’t get a job in a bank and a man with a sexual assault on his record shouldn’t work in a school. But I feel confident in saying….a former prostitute should be allowed to work as an electrician, bank teller, nurse etc. if she has the aptitude and training.  For the most part I really don’t care what my dental hygienist, radio dj or jewelry sales person did ten years ago. There are exceptions…I don’t want a plumber who is a mass murderer.

I recently saw a sad case of discrimination here in town. A local contractor needed an office manager. A man I  knew who had twenty years experience in that exact field applied.  He had great references. The company interviewed him twice and liked him very much.  They offered him the job.  Then the back ground check came back.  Five years earlier he was convicted of trying to have sex with a 17 year old girl. He served his prison sentence, he was punished for his crime. His wife stayed with him, he had two kids in college. Still, once the contractor found out about his crime the job offer was withdrawn.

Of course there are exceptions and some criminals should be punished fore ever and ever and ever. But for the most part I don’t think that’s right. When does his punishment end?

The only people who have a harder time getting a job than felons, according to CNN reports are…. black men. A black man WITH NO CRIMINAL RECORD is even less likely to be hired than a white guy with a record. That’s ridiculous and what I really want to know is….why is there even a question about race on  job applications?  If race isn’t supposed to be a factor in employment why ask if you are black, white, Hispanic, Asian etc?

I just don’t understand. I know it’s wrong and I know something needs to be done…but I’m not sure what it is.