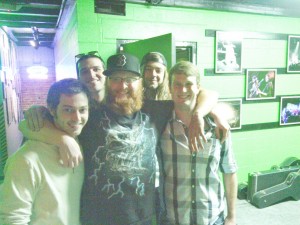 For three nights I slept in a bear cave.   I went to Nashville to visit my son, Jack, who is 25. ( He and his band,  Natural Outlaws, put on an kick ass show at the Exit Inn.)  Before I got to Nashville, Jack asked if I wanted to get a hotel room or stay at his house?

“I want to see you guys, I’m staying at the house.”

“Ok,” he said and I could hear the smile in his voice. “I’ll wash my sheets.”

While I was there a handful of guys from the band were in and out of the house, watching football, playing Madden, drinking, playing music, eating and sleeping( among other things) I was reminded of three things I already knew about boys/men living on their own.

You see, guys are actually bears with pants and guitars and we should all stop beating guys up for being…..guys. At twenty five all of these boys have graduated from college, they have jobs, pay their own bills on time and have car insurance. They take care of themselves. But they are not like us. They are bears who do what ever they want to do, when ever they feel like it. They don’t have to answer to anyone, they take care of each other, they are beautiful and powerful, like bears, in their natural habitat. But their rules and lifestyle are completely different from the rest of the world’s.

1. Guys don’t mind sleeping in their clothes and they don’t bathe as much as women…because they really don’t care about being clean or how they smell. Most women are compulsive about being clean. We shower two or three times a day. Guys shower when they have to or when somebody tells them they smell bad.

2.  Guys like looking at and trying to talk to hot semi-slutty looking girls. It’s in their nature.  Several of Jack’s friends ended up sleeping on the couch after a really, really late night. The next morning they explained what they could remember and James a crazy-smart brillant pianist explained  that around 2 am he absolutely had to go to a bar down town that’s something like Coyote Ugly where the girls dance on the bar. He knew it was dumb but he said he just wanted to see those hot dancing women. This boy had no intention of dating, sleeping with or even talking to any of the girls (I’m assuming) . He just liked looking at them and dancing like a fool…cause he’s a guy and it’s fun. Girlfriends and wives need to remember men don’t want to run away with hot girls who dance on bars or strippers. But they really like looking at them.

3. Guys like to fight, for them it’s fun.  I woke up at two in the morning and heard lots and lots of really loud yelling. Because I didn’t hear Jack’s voice I went back to sleep. The next morning two of the guys tried to remember what happened. They  thought they got in a fight over Madden NFL, then, just because they are dudes, they starting fighting. They beat the hell out of each other, then went to the ground, they rolled through three rooms, until one tapped out.

The next morning they were both a mess, sore and bruised but they were laughing.

If two twenty five year old girls had a fight at 2am the next morning their would be an arctic like chill in the air. They wouldn’t laugh or tease each other. They would drink their tea in hostle silence. Maybe after several hours of cold shoulders they would cry and hug but there would be no laughter.

Guys like fighting, it’s fun and they don’t care if they get hurt. Fights aren’t personal, they are recreational.  Women need to understand that.

And finally, guys don’t care if food is healthy, they don’t care if it’s loaded with salt, fat or chemicals. They just want it to taste good. And dudes don’t care if they get fat. Generally, they eat when they are hungry and stop when they are full, like bears. And they don’t understand why girls obsess over weight, why we can’t stop nibbling and we eat when we are upset. When guys want to lose weight they stop eating and play basketball. Maybe we could learn something from them.

We need to stop beating dudes up because they act like bears. God made them that way and maybe we can learn something from them.