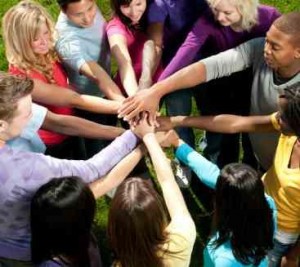 I’ve always promised my three oldest kids I wouldn’t write about this until they were out of high school.  I’ve wanted to because I think bringing a situation to light is the only way for things to improve.

This morning one of my daughters and I were talking about bullies at school and she casually joked, “We’ll it’s sure not the Christians who get bullied anymore, it’s so the other way around.”

I knew exactly what she was talking. She was never targeted but for more than ten years my three oldest came home from school several times, horrified how other students were being treated because their religious views didn’t line up with those of the big and popular local churches. Kids put notes on lockers that said stuff like “you’ll burn in  Hell for all of eternity,” they  put lengthy bible verses on cars and lockers followed with “so You Are going to Hell!” It got especially ugly for any student who didn’t condem all gay people or had pro-choice leanings.

Even though lots of the church teens partied just as hard or harder than others, that wasn’t the point.  If kids had different beliefes or thoughts they were ostricized, picked on and harrassed. Yeah, for several years we had a big ‘ol gang of hard core “Christian Bullies.” They were vicious, mean and self rightious. And I think it was mostly pretty girls. (I could be wrong there) I heard stories all the time and they broke my heart.

My heart didn’t’ break for thebullied  kids, most of them were pretty smart and resiliant so I figured they would be fine.  I felt bad for lots of the adults and leaders in the local churches, many I’ve known personally for years and they are lovely, wonderful, selfless Christians. I love them dearly and still do and I would swear, to this day, they have no idea how the message of the church and Christianity is being interruped by their pre-teens and teens.

What these “Christain bullies” didn’t seem to get (because they are young I suppose) is being mean, rude and cruel is a really bad and ineffective way to invite people to church. If you put ugly notes on my locker or whisper names as Iwalk by in the hall,  there’s not a chance in Hell I’ll want to be like you, go to your church, or hang with the kids you say are “Christian.” This is the worst form of Missionary work ever.

Self rightious bullies make kids who are raised by parents who didnt’ take them to church believe all Christians are mean and vindictive. As a result they never ever even want to try going to church.  That’s the real tragedy in this situation.

The actions of these teens turns kids against Christ, His work and His words.

The conduct of these “Christian Bullies” is so unlike that of Christ it’s almost laughable and a little pathetic.

My youngest son loves loves loves going to Wednesday youth group and church services at Millcreek Baptist Church. the Pastor there doesn’t realize it but I’m a big fan because he’s always so happy and loving and welcoming. I’ve listened to him give a eulogy for a man I loved with a drug ladden past and he was wonderful.

But several years ago a group of 13 years old from that very same church cornered my oldest daughter, who was 12 or 13 and told her our entire family was going to Hell because were Episcopal and the Episcoapal church doesn’t automatically condem gays to Hell.

When my daughter learned I was letting Sandor go to Millcreek on Wednesdays she was furious! She was convinced they would be mean and treat him horribly.

Nothing could be farther from the truth.

Adults, I guess it’s up to us to let our kids know how we expect them to act, how to be Christ-like and how to show God’s love to everyone. Even people who are different.

Persoanlly, I believe Christ wants us to love each other, to be kind, respectful and  lead by example. Show me the gates to the Kingdom of Heaven, I need all the help you can give me.  But please, don’t beat the snot out of me then expect me to want to walk in your footsteps.

This morning Lexie and I drove  to the corner store, David and David’s and I saw a girl who goes to school with Lex, but is a year older. I said, “She really is pretty.”

Lexie explained this situration in such a “low key, no-big deal” way. But I’ve heard this kind of comment about that church over and over and over in our small Arkansas community. Kids and adults talk about two  churches in our area on a regular basis.

If you go to one of these churches you have it easy,  and you get to go to heaven. If you attend a different church, these church goers make you feel as though you’re chances of passing through the pearly gates are minimal. And those congregations are seen as openly hostile and rude. That’s just crazy. No church wants that kind of pr.

This weekend an adult friend of mine compared the pastor of the ______Church to John Lithgow in Foot Loose. “There will be no dancing in my town!” and “You people from the outside, who are dancing, are going to hell.” But he doesn’t even realize half the kids in his own congration are swinging and swaying every chance they get.

Bottom line, some churches are really snarky. They aren’t nice to people who don’t go  their.  And that seems absurd because Christians are supposed to be nice and Christ-like, right?   If I was a pastor or minister (trust me I have too many suitcases of sin to lead anyone) these are not the adjectives I would want associated with my church.

The truth is I know some very nice people who go to these churches.  They are really lovely.  But the rude ones are also the noisey ones, and they are the ones everybody remembers.  Maybe 80 percent of the people in church are kind and loving but the 20  percent ruin the churches reputation.

If I led a church I’d want folks to think of my people as the smiling, l0ving, giving, supportive congregation. Then new people would want to join my church and  they could learn all about God’s love.

Here’s the truth. You need to be nice to the sinner to get him through the church doors. This includes kids in high school, hobos and soccer moms.

Why would anyone join a church full of  snarky, rude, judgemental people? If they make me feel bad  I don’t want to hang with them.  .