Finally, I have almost experienced a cyber-bully. I let my youngest son,I’ll call him Bucky, have a Facebook page even though he’s only 9. But I use my e-mail address so I have access to the page and see everything people write.

Bucky doesn’t really care about anything except looking at cool pictures, the silly games and writing “Hi’ on everybody’s wall.

Things have been problem free for more than a year but last month a  kid name Jason that I don’t know sent Bucky a message, something like, “my homie said u r gay for real.”

I didn’t catch this comment until Bucky wrote back “butt face”.

Then Jason, who is three years older than Bucky wrote ‘bring it on dick banger”.  Bucky didn’t know what any of this meant so he came to me to ask what Jason was talking about.

AAAARRRRR. I blocked Jason after going over every message, picture and video on his face book page.

“Who is this kid”,I asked Bucky while he was playing with his Legos.

Bucky didnt’ seem bothered so after blocking “bad kid Jason” I let everything drop.  I told big sister to keep an eye on Bucky while they were on the bus.

We haven’t heard from Jason in a month, but today a new message popped up on Bucky’s page. All it said is “F UUUUUUUUU.”

So what am I supposed to do?  Should I send “bad kid Jason” a message and say, “Hey, idiot, this is Bucky’s “Bad-A” mom, and I’m reading all the messages you send.”

Do I ignore it?

Or, do I print the messages out and go tell his mom?  I figured out who she and and were she works while studying his FB page.

One thing I have figured out. Just having access to your child’s FB isn’t enough. You have to actually look at the page. Figure out what’s really going on.

I’ll let you know what happens.  Please, send me ideas if you have any. Please, please please.  hampoland@gmail.com 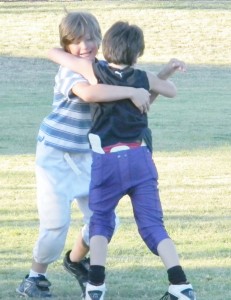 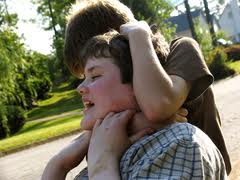 wrote a blog about bullies in her highschool. You can read it at http://sillystupidhighschoolblog.blogspot.com/2011/09/go-nerds.html  And it made me think about this blog I wrote about a year ago.  My daughter, Mary, was bullied when she was a little girl. But the story isn’t what you’d expect. Thanks for reading.

When I dropped Sandor, my 8 year old son, off this morning he ran  to the playground, overwhelmed by his backpack. He never hesitated or even looked back at me. Instead he happily threw himself into the ocean of kids.

With stunning clarity, I remember the year Mary hated that ocean of kids.She would get out of the car soooo slowly, look at me, pleading with her eyes that I wouldn’t make her go to school. And then  Mary would gather all her nine year old courage and walk toward the play ground.

That was the year Mary had a bully problem and it was bad. A little red neck white trash boy named James Rufus made my Mary’s life absolute hell. He was a short, skinny kid, with shaggy, semi-greasy hair and hand-me-down jeans and tee-shirts. James had the kind of “screw you” expression that made you want to slap him before he even opened his mouth. And if you did try to talk to the boy he would just shrug and say “what ever”. Every day this nightmare of a boy singled Mary out on the playground. He followed her around and called her horrendous names, “fat bitch cow” being the least offensive. He said she did things to boys that she didn’t even understand.

I was  furious. I wanted to burn the school down. Of course I talked to teachers, principals, counselors. I cried and yelled, threatend the school with law suits, I even threatened to have nine year old James Rufus arrested on harrassment charges. If somebody followed me  and called me vile names I could have them arrested. But I couldn’t stop James.

The school counseled him, gave him ISS, took away recess and sent notes home but nothing worked. Mary came home day after day, crying, confused and miserable. I was furious and heartbroken.

Finally, after more than a month of horrendous verbal abuse Mary snapped. She screamed at James Rufus in front of kids and teachers, “My dad’s got a nine millimeter gun and he’s gonna kill you if you don’t stop, James.”

Mary was immediatly suspended from third grade. This was 15 years ago and the country was terrified of school shootings.

While Mary was home I called the school to get the Rufus’ phone number. They wouldn’t give it to me but I poked around and found somebody who know somebody and they gave me the number.

I remember so clearly, my hand was shaking with absolute rage as I dialed the number. I was going to eat that entire family for lunch.

James answered the phone. “This is Mary’s mom, James, let me talk to your mom or dad.”

He sounded tiny, “Please don’t do that, Ms. Hampo I swear to God I’ll stop. Please don’t tell my dad.”

“James, I have to. I can’t let you keep on hurting my daughter. I love her too much.”

He begged and begged then finally handed the phone to his father. I explained the situation and I remember the man’s exact words, ‘I’m gonna beat the shit out of that kid. I swear to God he’ll never say a word to your daughter.”

I felt sick and tried to reason with him.I tried to tell him I didn’t think beating James was the answer but he didn’t hear a word  and hung up suddenly.

James Rufus never said another word to Mary and six month latter he was out of our school. He had to go to the “alternative” school, the hell hole they send the “bad kids”.

Now, here’s the strange part of this story.  Mary and James are now friends on facebook, though he says he doesn’t really remember her from school. Of course he doesn’t. Bullies don’t remember anybody they pick on. But the victims, those that are bullied remember ever single brutal word.

And Jame Rufus is now openly gay, he told Mary he has a boyfriend and he sells real estate.  Even now I can’t  imagine what it would be like for a gay boy in our little rural Arkansas school district or in the single wide trailer the Rufus family lived in.

Suddenly, it all makes sense. That’s what Mary said when she found out  about James Rufus.