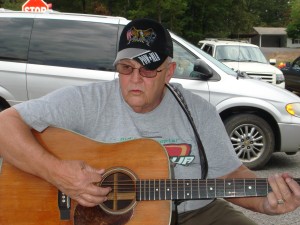 Two or three weeks ago a dear friend of mine took a sixteen mile bike ride, put his bike up and had a massive heart attack. He was way out in the sticks at the time.

When I learned how long his heart was silent and his brain deprived of fresh blood and oxygen I was heartbroken.

For days the reports were all heartbreaking devastating. No brain activity, minimal heart power. It was terrible.

But my friend, Boss, is an amazing man. When he was young. he and a black man had a tire store in Southern Arkansas. He told me they would change tires all day long on big trucks for $2.50. They used a crow bar and a sledge hammer and sometimes worked till midnight if there were tires to change.

This summer he and his son sold their chain of 32 convenience stores/gas stations for a lot of money. But it all started with long hard days changing tires.

Boss is a gospel musician. He and his band play in nursing homes on Sunday mornings because he likes to spread The Word and make old people happy.

If ever there was a man God would lay out a miracle for, it would be my friend, Boss.

Twenty five minutes with no heart beat. He shouldn’t be with us. But today his son let me know he sat up in bed and then, with help, was able to stand up.

With God and Boss, all things are possible.