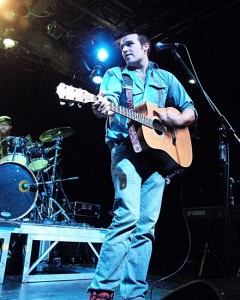 There was a knock on the door.  I was alone, in my son’s cool  little house in a semi-sleazy Nashville neighborhood. It was after mid-night and someone was knocking on the door. Should I answer? What if it was a burglar  Do burglars knock?  The house was full of guitars, speakers, amps and keyboards. The knocking continued.

Peeking out the kitchen window, I studied the strangely preppy looking boy with George Michael hair and a Polo jacket. He stared at the door and knocked again. I was pretty sure I could take him, so I opened the door, wearing a pair of silky pjs with chickens and roosters all over them and a New Orleans Saints jersey.

“I know, I can tell. You’re just like him. I need some pot. Where’s George?” He wanted me to let him in but that wasn’t going to happen.

“They’re at practice. Do you want me to call?”

I was stunned. Was the kid an idiot? Who asks a middle age mom in chicken pajamas for pot? Closing the door, I called my son and was surprised when he actually answered. “There’s a guy here who wants George and some pot.”

“What? Who is it?” Simon asked obviously confused and instantly annoyed.

Simon heard our exchange. “Oh my God, what the hell is the matter with him?  Tell him we’re at Studio D.. I’m so sorry, Mom. I’m gonna kick his ass. What an idiot.”  He hung up before I could say anything else.

“Jake, they are at Studio D. But I’m not sure you should interrupt practice. they have a show tomorrow night.”

“I know where that is.  Cool. Goodnight.”  He wandered up the street where a girl was waiting in the car for him.

After closing and locking the door I snuggled back into the blankets on the  sagging couch.

The next morning I woke up around nine.  There were two guys and a girl on the other couches. I could identify their various limbs by the exposed tattoos. One arm had an Arkansas Razorback, that was Simon’s. There was a foot with a lovely floral display, that would be Jessica’s. And there was a hairy shoulder with a pirate ship and jolly roger. I had no idea who that was.  All the bodies were wearing most of  the clothes they had on the night before.

Stepping over guitars, a tray of pot and pipes and play station controllers, I slipped into the kitchen and made coffee.

That was my first night in Nashville with my son and a bunch of brilliant musicians. Seriously, I’m stunned at how good their band, Natural Outlaw, is and how ridiculously talented and bizarre each individual band members is.

I’ve seen the new series Nashville. Maybe it’s an accurate depiction of life for some bands, singers and songwriters. But it seems very shiny and plastic compared to my weekend with various band and musicians in Music City. And a lot less interesting.  If the characters on Nashville were a bowl of soup, they’d be canned chicken noodle and saltine crackers. The members of Natural Outlaw are more like whiskey infused gumbo with a pan of cornbread.

I’ll let you know what happened on day two of my visit pretty soon. It was something.