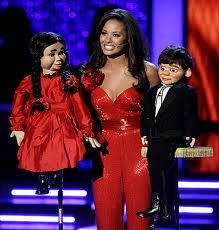 This week I met , Miss Arkansas 2010,  Alyse Eady and 1st Runner Up in the recent Miss America Pageant. She stunned the world with her yodeling ventriloquist act. (I swear I’m not making this up.) This magnificent girl sat in front of millions of people and made two puppets yodel.  And it was awesome…so she made it to first runner up. (I was a little disappointed because in previous performances she clog danced while she sang and made the puppets talk. But you can’t get everything all the time, right?)

When I met Alyse I didn’t know what to expect. Actually, I wasn’t expecting much because I’m mean and judgemental like that. I figured she would be some gorgeous but vapid beauty pageant queen with too much make up.

I was shockingly wrong.  First, she was eloquent, quick witted and self effacing. She had a little Jesus fish tattoo on her foot. I only saw the Jesus fish because she unconsciously took off her shoes under the desk as she was being interviewed…just like a real person!

She explained that Las Vegas had invited her out to perform with her puppets, maybe they were going to offer her a job. Then she made a funny face and basically said she didn’t really have much interest in being a performer. She likes working with non-profits.  That, she said was her favorite thing about being Miss Arkansas, she got to travel the state and visit all the Boys and Girls Clubs, stuff like that.

Hummm, this was not what I was expecting to hear from the 1st runner up in the Miss America Pageant.

She refused to say anything snarky about David Letterman though the entire state thought he was really rude to her on his show.

And finally when I asked her about those black bikinis they had to wear in the pagent she laughed. And talked about how awful they were. They made everybody’s butt look flat as they walked away from the camera, “And why did they even have a camera back there, on our butts any way?” she mused.

So, I was completely wrong about Alyse Eady, Miss Arkansas 2010. I wonder if I’m wrong about other stuff too? Probably not.