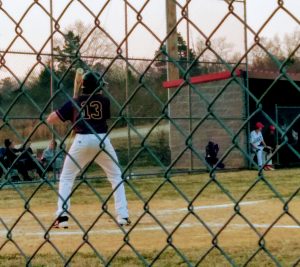 I hate baseball. Ok, maybe ‘hate’ is to strong a term. But I don’t really like the game. I can watch completely random football or basketball games on tv or in person and get passionately involved…but baseball? Not so much. It’s boring.

Here’s my problem. My youngest son, Sandor, is in 9th grade and plays baseball for the Ft. Lake Cobras. Purple and white pine stripes all day long. There he is on third base, looking handsome.

I try to be a good mom so we try to make some games, to be supportive. But the games are soooo long, and there are soooo many games. Two or three a week! Typically nobody get’s hurt and it’s hot sitting in the bleachers. Still, we go to games and I yell like a maniac even though I don’t really know the right things to yell. “Take him out!” is one of the wrong things I’ve learned not to yell. Other parents give you stink eye.

Earlier this week Sandor was playing third base and missed a pop fly. Nothing terrible happened because of his bobble but he was really upset with himself.

I really like to fix problems. So, the next day, after work, I went to Dick’s Sporting Goods and bought five baseballs.

I put Sandor in the middle of the yard with his mitt and started hitting balls at him. I was doing ok but I kind of freak out when he throws the balls back to me. The kid throws pretty hard and I catch like a four year old. So, I recruited his dad to catch.

Things were going pretty well until our big dog Aries got involved. Every time I hit a grounder , Sandor had to out maneuver and fight her. If Aries won she trotted back to me with her fluffy tail raised high and gave me the slobber covered ball.

For thirty minutes the four of us played and laughed in the yard until the sun set and it was too dark to see the ball.

Sandor had a game last night and he took care of a grounder easily. He told me all about it at breakfast this morning.