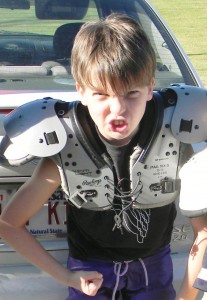 This morning Lexie stood in the bathroom doorway as I was putting on my makeup.  “Talk to Sandor about Kennedy, she’s kicking him in the groin on the playground.”

Kennedy is Sandor’s ex-girlfriend.  They are in fourth grade and “went out” for months.   Much to my surprise they were holding hands and he walked around with his arm around her sometimes, just like big kids. But two months ago Sandor broke up with Kennedy because “she got mean and bossy and stopped being fun to play with”.

I waited till we were in the car. “So what’s going on with Kennedy?”

He made a noise with his throat meaning he was disgusted. “She hits me and pushes me from behind and kicks me all the time on the playground.”

“Did you tell the teacher?”

“I tried but she wouldn’t listen.  She told me to ignore it. But she does it every day.”

“Has she ever actually made contact when she kicked at you?”

“Yeah, lots of times. She got my knee last week but she was aiming for my nuts. If she was a dude I’d hit her so hard.”

Sandor has been in Taekwondo for seven years so his defensive skills are pretty sharp. Good thing Taekwondo teaches lots of groin blocks.

And he’s not afraid of a fight.  A couple of weeks ago he came home with bloody knees. He told me a bigger kid grabbed his basket ball and threw it into a ditch then started walking away. Sandor ran up behind the kid jumped on his back. They both went down. Thankfully teachers didn’t see all this action or both boys would be in ISS.

Good thing there’s only three weeks of school left. Until then he better keep on blocking.