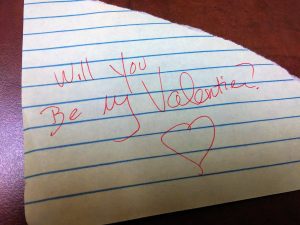 There seem to be two kinds of women in America, 1. Those who hate Valentine’s day; they think it’s a commercial ruse that inflicts ridiculously high expectations. Lots of women boycott the holiday on principal.

2. Then there are those who buy in and go hard. Their men must spend at least a hundred dollars on candy, flowers, food and cards or he clearly “doesn’t love or appreciate you enough.”

Both ideas are kind of dumb and unnecessarily harsh. I don’t think there’s anything wrong with a holiday that encourages love. But taking a second mortgage out on the house to prove our love seems kinda moronic too.

Yesterday, after being “together” and married for 25 years, I think, Alex got it absolutely right.

First, there was a scribbled note on half a sheet of notebook paper next to the coffee pot.  All it said was, “Will you be my Valentine?” Nice! And there were two Hershey kisses. Perfect, he remembered the day! Pretty immature and adorable. Well done sir!

When I got home there were daffodils he’d picked in a vase and he fixed dinner! I’m trying to lose weight on the low carb diet right now and he took that into consideration…steak and lobster while we watched a new episode of The Big Bang Theory. Killed it.

But the best part of this Valentine’s Day? He changed the sheets on our bed…all on his own…without me asking. I woke up in the middle of the night and thought about how great those sheets felt as he snored next to me like a jacked up Harley Davidson.