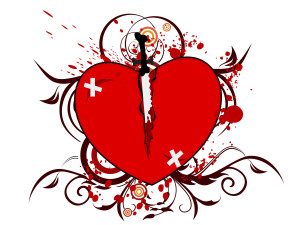 The next morning, Cal dressed and walked into the kitchen.  Tara and Rachel were already eating pancakes with syrup and strawberries.  Typically, Tara slept until almost eight. The kitchen in the morning belonged to Cal and Rachel.

Tara looked at him but didn’t really smile. “I’m taking Rachel to school this morning, Cal.”

Driving to school, Cal banged on the steering wheel. He didn’t know what he was supposed to do and this was a foreign feeling.  He prided himself on being a man who always approached problems with a system. He studied them, laid out a plan, then took action. But now he was lost.

What he really wanted to do was find Mark Greenland and beat the shit out of him. But that would do at least three things he was sure of. First, it would get him arrested because the kid was a minor, only seventeen. Second, it would cost him his job. And finally, it would turn Rachel against him.  She wouldn’t understand. She didn’t know enough to understand and he couldn’t tell her.

Then Cal had a thought. Why not tell Rachel the truth? Tell her the whole story. She was a smart kid, she loved him and her mom. She was old enough to understand. He and Tara could talk to over dinner, explain everything and then move forward.  If Rachel knew the truth about Mark, she would be safe from him.

Simply having a plan made Cal feel better immediately.And it was a good plan, one that would help bring his family back together. Because he was moving forward, and simply telling the truth, Tara might even possibly start forgiving him.

At 3:00 Cal was on the field, holding a clipboard and pacing.  He was waiting for his team, but what he was really waiting for was the cross country team. By 3:30 his coaches and team were on the field. And so was the Cross Country team, but Rachel and Mark weren’t there.

While his guys ran laps, he found Murphy, the cross country coach, in the bleachers with a notebook and stop watch.

“Hey Coach,” he said as he sat down next to Murphy.

“Hey Cal, what are you doing up here?”

“Oh, another runner needed to get some new shoes but he didn’t know where the New Balance store was. Rachel offered to go with him. I hope that’s ok. It’s Mark Greenland, he’s a good kid, and fast.”

Call nodded and stared across the field. He didn’t see his players,  didn’t see the coaches or benches or field goal posts. He only saw a vast and empty space. A terrain unfamiliar to him but he knew he had to find his way across.

After telling his assistant coach to handle practice, Cal walked to his office and called Tara. He told her what Coach Murphy had said. Then waited for her to respond.

“Cal, oh my God, if you had just done the right thing. If you did what we agreed you needed to do, we wouldn’t even be having this conversation. You realize that, right? But for some reason, that I still don’t understand, you decided to cover for this kid and now look what’s happening. Cal, do you understand this is entirely your doing? This is all happening because you didn’t do what you said you would do. All you had to do was THE RIGHT Thing!”

“You can try Cal but I don’t know if that will work.  She’s never really liked a boy before and they were texting this morning when I was driving her to school. You should have seen the look on her face. If it hadn’t been Mark, I would of thought she looked adorable. You have to find a way to make this stop. You have to. Hang on a second. I just got a text.”

The phone was silent and then Tara was back. ‘It was Rachel. She just said she’d be a few minutes late. She said she’d be home by seven.”

“Seven? No, tell her she needs to come home now.”

“Cal, I don’t want to start a fight with her before you even try to talk to her. Thirty minutes won’t change anything. But you have to fix this, you have to. If you don’t I’m gonna talk to Mark on my own.”

“I’ll fix it. I swear to God I will. At this point I don’t care what the fuck I have to do. I love you so much Tara and I’m so sorry.”

Cal waited, but she didn’t respond.

Tara’s car was parked in the driveway. Cal parked, took a deep breath and got out of the truck. There were lights on in the house but not on the front porch.

His wife was sitting at the kitchen table staring at her phone.

“Have you heard anything else?”

After opening a bottle of beer, Cal sat down next to his wife.

“I’m just gonna throw a pizza in the oven for dinner,” she said absently.

“That’s fine, whatever is easy.” He took a sip of his beer. “Tara, Rachel has never ever been anything but smart and kind. Hell, she’s perfect. We have to have faith in her. She’ll get it, she’ll understand.”

“I hope you’re right but she’s also a fourteen year old girl. I remember what I was like when I was that age Cal. Think about the girls at school.”

“No! She’s not like them Tara. Rachel is nothing like most of the kids I see…..She’s sweet.”

Tara sighed, “I know she is. She’s really sweet. And maybe that’s part of the problem. We’ve protected her too much.”

Cal heard a motorcycle pull up in front of the house. By the time he got to the door, Mark was gone and Rachel was walking up the stairs grinning. She was carrying her backpack and a helmet. “Hey Pops!”

“What were you doing on a motorcycle, Rachel? You know that’s not ok.”

“I know but it’s all good,  I promise. Mark was super careful and he even made me wear his helmet so I’d be safe. His car was broken down so we had to take his bike. It was amazing.”

“No Rachel, you can’t do that. You can’t just jump on a motorcycle and take off. You have to talk to us. You know how we feel about motorcycles.”

“I know, but I promise, we were super careful. Really. And I’m home now. ” She hugged Cal for a long time, and he knew it was because she had so much fun, not because she loved him.

Cal pushed himself away and said, “Go inside. Your mom needs you.”

But by the time he stepped away from her Mark was already gunning the bike, and then he was gone. the chicken shit was scared to talk to him. He wouldn’t even look at him.

When Cal walked into the house Rachel was telling her mom about the adventrue. Tara was silent, she put plates on the table and waited for Cal.

They all made it through their first slice  before Cal tried to start the conversation. “So Honey, I need to talk to you about Mark.”

“I know you think he’s too old, Pops, but we’re just friends.”

Cal shook his head. “It’s not that Rachel.  I need to tell you about him. He’s not like he seems. He’s flirting with you to try to get at me cause he’s really mad about some things that happened last year.”

“Mad at you, why? And what do you mean he’s flirting with me to get at you? What, you don’t think a senior like Mark would think I’m good enough to flirt with, for real? ” She looked at her mother. Tara tried to hold her hand but Rachel pulled away.

Cal pushed on. “No, that’s not it. It’s just that Mark and I had an issue last year and he said he was gonna make me regret a decision I made about him. I think he’s gonna just try to hurt you, as a way of getting back at me.”

Rachel’s beautiful blue eyes were now rimmed in red and her bottom lip trembled”Mark and I are friends, it has nothing to do with you. Nothing.  You know he says such great stuff about you and I can’t believe how you’re trashing him. That’s crazy. He told me you guys wouldn’t understand because I’m a freshman and he’s a senior. He warned me and God, he’s exactly right.”

Cal hesitated. He told Tara he would tell Rachel the whole story but now he wasn’t so sure. “Last year, after a practice I found Mark doing something bad, something he wasn’t supposed to do.”

“Something bad? What am I? Four?  What was Mark supposedly doing?”

Supposedly, the fact she used that word hurt. But Cal knew he had to keep going. “Mark was selling drugs to some kids, little kids.”

“Little kids, what kids, how old were they?”

“And what kind of drugs?”

“Jesus Rachel, does it matter? There was some pot and some kind of pill.”

“You don’t even know what kind of pill it was?”

“Rachel, stop. That’s not the point.”

“Everything you are saying is  ridiculous, you don’t even know what he was “selling” to these kids you know nothing about. And besides,  he’d never do that. He told me all about his mom, about his whole family. They are a bunch of druggies and he hates that, he hates drugs.”

“There’s no way, that’s not him.” Rachel looked at Tara, pleading. “Mom, you don’t understand what he’s been through. You don’t understand how hard it’s been for Mark. You guys are just saying this because you think he’s too old for me. But age doesn’t matter. Oh my God, I can’t believe you  would make up this stuff just because you don’t like him. Mark warned me you might do something like this. I can’t believe he was right.” The tears were starting, she wiped them away as though anger was a weakness.

Cal stood up, then sat back down. “We’re not making it up Rachel. I swear. Honey you know we only want the best for you , you know that. Mark is not a good guy.  When I tried to talk to him about the drugs the next day, in my office, he went freakin’ ballistic, it was crazy. He’s not a good guy, Rachel.”

This time Rachel stood up, tears rolled down her cheeks. “He’s nothing like you’re talking about. You have no idea.  ” She took a step back from the table.” It doesn’t matter that he’s a senior and I’m a freshman but you can’t see that and he told me you would be like this.” She stepped even farther away form them. “Why can’t you understand that we are old enough to make our own decisions, to know who’s right for us? Why don’t you get it? You have to stop treating me like a child, because I’m not one anymore.”

And then she was gone, up the stairs. Gone.

The clock in the living room clicked, the pizza remained untouched, Cal and Tara were silent. They had no words. Nothing to say. For almost thirty minutes Cal waited for his wife to speak. Every time he tried to say something she shook her head, telling him to stop immediately. And so he did.

*Thanks for reading. Let me know what you think and Part 4 will be up next Monday.