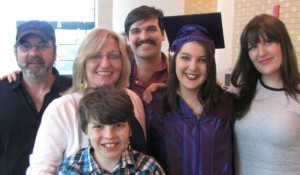 After giving two out of four of my children money last week a friend jokingly (I think) called me an “enabler.”  Driving home I thought about that and then realized she was right.

I am an enabler and will continue to send cash when needed… as long as my kids are moving forward on the right track. Here’s the tricky part. As a parent we have to decide if we think our children are “on the right track” and if “enabling their behavior is what we really want to do.  At nineteen Lex isn’t self sufficient but she’s doing everything right and she’s moving down the tracks toward her life.  She’s go a full ride to college and hasn’t lost it, she works fifteen hours a week at for a non profit. She wanted to get a second job but I said “don’t’ do that please focus on grades and finals”.   She needed money for food and gas. I think, if she wanted money for new speakers in her car and another tattoo I would have said no and laughed at her.

Mary and her boyfriend Andy are doing really well in their new city of Indianapolis but her just barely making enough money right now. That will change but for now things are tight. We all desperately want Mary home for Thanksgiving. Mary want’s to come home for Thanks giving, so I’m helping a little.

I remember when I was sixteen and needed money to upgrade my dark room equipment.  I didn’t want to ask my parents for the cash, even though I was actually making money taking pictures. A couple of weeks before my brother Jack died at the age of 22 or 23 he sat down on the edge of my twin bed with a can of Bush beer in his hand and said, “Ask Mom, that’s what parents are for, they live for shit like this.  It’ll make her happy.”

I did not know exactly what my big brother was talking about that night but I took his advice. And he was absolutely right. I never had the chance to talk to my brother Jack again about his advice. But I’ve thought about it every time I needed to “enable” one of my kids, or one of their friends.

I can’t tell you how happy Alex is when he needs to buy tires for your car. It’s his way of saying he loves you. Sometimes he even buys them for one of your Hampoland friend’s cars and that’s a good thing too.  I promise this is true.

Sometime in the near future you will all be grown, self sufficient and our help won’t be necessary.  Jack doesn’t need us financially at all anymore. And it actually makes us a little sad.

But until that day arrives, Alex and I are here for you always, as long as you’re moving in the right direction. And my brother  Jack was right, nothing makes us happier. So thank you for asking.