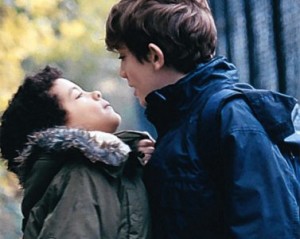 I’m not supposed to write about this but I can’t keep my mouth shut.

Yesterday before school a bigger boy in my son’s class shoved him face first against a wall and he banged his head pretty hard. Instinctively, my son spun around and punched the kid in the face, hard.  The boy went down and cried. But Sandor helped him up and apologized and they shook hands.

Sandor called me to let me know what had happened. He was upset because he know if a teacher saw him he’d get in big big trouble, probably suspended.  He was also upset because he made the boy cry.  When I pressed him he explained he was kind of a big slow kid who did stuff like this all the time other people. He also told me he wanted to keep punching him but the yellow belt tenant in Taekwondo is Self Control.  He did the right thing and stopped.

I was totally stressed all day waiting for a call from the school. Right after lunch Sandor texted me “I feel so guilty”.  When we got home I asked him why and it was because the boy cried and that always makes him feel really bad.

Good news, this morning Sandor texted me again, the kid told him his face still hurt and they shook hands again.

Then my son told me about another fight which took place in the football lockerroom.  There’s a young man, I’ll call him Joe, who’s mother died a couple of years ago.  A seventh grade boy started making fun of Joe’s dead mother. (It doesn’t get any worse that that.) One of the star football players slugged the kid several time to shut him up. (Obviously, in my mind the right thing to do.) I believe this situation was handled appropriately by one of the coaches and was never reported.

The truth is some kids are just wretched human beings right now but they aren’t any worse than they used to be. I remember getting pushed around in first grade because I liked Davey Jones in the Monkeys.  And in 5th grade when I had to go to a new school for a little while in Florida all the kids and bus driver called me “Pig Farmer” because of my accent. Kids are really mean.

My son has been in Taekwondo, and messed around with boxing since he was three. He’s a second degree black belt and he’s been trained to do exactly what he did. Defend himself.  He’s also been taught to always always stick up for a kid being bullied. that’s one of the founding principals of our Taekwondo school and house hold.  That’s his job. There are sheep and there are coyotes in life and especially in school. Somebody has to be brave enough to protect the sheep. that’s the natural order of things. Walking away when you can help someone is a disgrace.

Hopefully our school administrators will come to understand (and many of ours do now, thankfully) we’re not helping anyone, especially the sheep, if we tell kids not to defend themselves and weaker students from punk ass coyotes. Teachers, administrators and the police can’t be everywhere all the time. So when we tell our strong and righteous students to step back we are only emboldening the bullies, we are giving them even more power.

It’s a fine line, but again, this is a situation where “zero tolerance” just doesn’t work.  If I defended an old person who was being pushed around at Walgreens by a big tough guy I’m pretty sure the police would take the circumstances into consideration.

One thought on “The Righteous Punch”